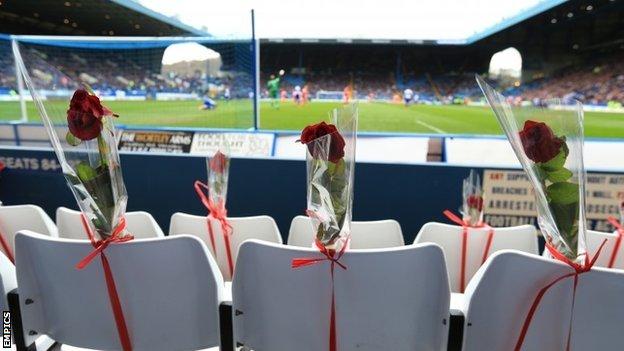 Sheffield Wednesday and Blackburn shared the points on the 25th anniversary of the Hillsborough disaster at the Owls' home ground.

Owls coach Stuart Gray and Blackburn boss Gary Bowyer laid wreaths in front of the stand where the 96 Liverpool fans died in 1989.

Jordan Rhodes put Rovers ahead and Lewis Buxton levelled before Craig Conway and Michael Keane made it 3-1.

Atdhe Nuhiu pulled one back and then scored an equaliser in injury time.

The day saw tributes to the Liverpool fans killed in a crush inside Hillsborough at their FA Cup semi-final against Nottingham Forest in 1989.

As well as the wreaths, Wednesday had marked the day by changing 96 blue seats to white on the lower tier of the West Stand at the Leppings Lane end of the ground, and placing a single red rose on each of them.

Matches in leagues across England kicked off seven minutes late to remember the fans who died on 15 April 1989.

When the game began, Blackburn took the lead when the Owls failed to clear and Rhodes was left to round Chris Kirkland and slot home.

Buxton levelled when he forced the ball home from a corner but Blackburn went back in front through Conway's low shot and Keane's header doubled their lead.

Nuhiu pulled one goal back from close range when Paul Robinson failed to deal with Michail Antonio's low cross and levelled in the fifth minute of injury time by firing high into the roof of the net.

Nuhiu almost claimed his third and Wednesday's fourth before the final whistle, but Robinson beat away his shot.

"No father, no mother, or no son or daughter should lose anybody at a football game.

"With four games to go we have just to try and win all four games and that's all we can do.

"If you look at the game as a whole we have had enough chances to win it. It was naive in terms of our defending towards the end of the game."