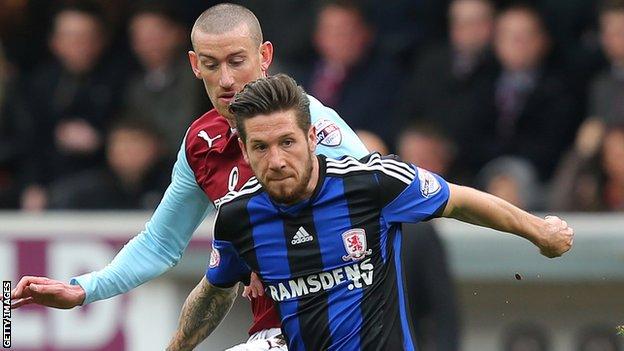 Burnley's wait to secure promotion back to the Premier League goes on after Middlesbrough won at Turf Moor.

Jacob Butterfield scored the only goal on 51 minutes to leave the Clarets needing five points from their last four games to return to the top flight.

Michael Kightly had earlier struck the bar for the hosts, while Danny Graham and Butterfield went close for Boro.

The visitors finished the game with 10 men after Daniel Ayala was shown a second yellow card in added time.

Burnley, who were relegated from the Premier League in 2010, came into the game knowing victory would secure them promotion if third-placed Derby lost to Huddersfield.

But while the Rams won 3-1, the Clarets fell to defeat against a Boro side who have now won four games in a row.

What happened to fortress Turf Moor?

The hosts looked the more threatening in the early stages, with Ashley Barnes denied by some last-ditch defending and Danny Ings firing wide from a Kieran Trippier pass.

But Aitor Karanka's men showed their attacking prowess when Lee Tomlin found space on the edge of the box before rifling an effort just wide of a post.

Moments later the Clarets thought they had broken the deadlock after Kightly beat Dimi Konstantopoulos, but his looping header hit the bar and Barnes's follow-up was off-target.

At the other end, Albert Adomah surged into the Burnley half and found Graham, but his first-time volley flashed over.

Adomah then showed his worth at the other end, somehow blocking Ings's effort after Kightly had weaved into the area.

And the Boro winger's efforts were rewarded as his side took the lead, Tomlin carrying the ball forward before releasing Butterfield, who calmly slotted his left-footed strike past Tom Heaton.

It was almost 2-0 four minutes later as Tomlin went close, before Ings sent a snap-shot just wide as the hosts sought an equaliser.

Konstantopoulos remained unflappable in the Boro goal and, despite the late dismissal of Ayala, they were not to be denied the points.

Burnley boss Sean Dyche: "It is a top end performance by our standards, totally dominant, fantastic energy on show and it is incredible the ball didn't end up in their net at some point.

"I have spoken to the referee and it always amazes when they say 'it is in your opinion'. I have looked at it 47 times on my laptop so I don't know how it is (an) opinion, that's what I am flummoxed with."

Middlesbrough manager Aitor Karanka: "Dimi Konstantopoulos was the best player for us today - he has played very well for us in the last few games.

"I am pleased with his performances and for him as when I came he was third or fourth-choice keeper.

"They had a lot of chances today and we were lucky. They had more chances than us and showed what kind of team they are - one of the best in the Championship."