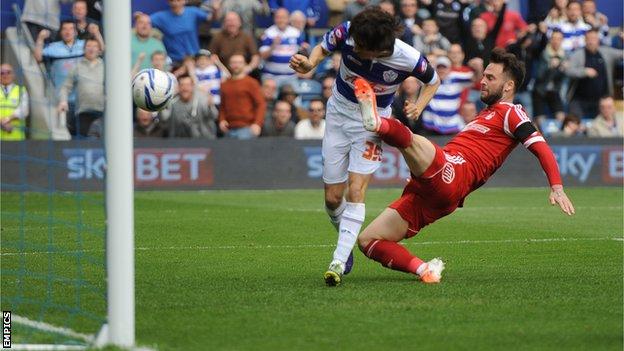 The home side took the lead when Yossi Benayoun headed in after keeper Karl Darlow had parried Tom Carroll's shot.

Automatic promotion appears out of reach for QPR, but the victory should see them in the play-offs and provide much-needed momentum after three games without winning.

Forest have now gone 12 league games without a win and the reversal in form they needed to re-ignite their challenge for a top six spot did not materialise.

The visitors found themselves behind after just two minutes when Carroll's shot was saved by City keeper Darlow before Benayoun raced in to nod in the loose ball from close range.

Forest had struggled to mount a threat on QPR's goal but equalised when Lascelles headed in a Lansbury corner against the run of play.

Parity lasted six minutes before Hoilett restored QPR's lead when he played a neat one-two with Benayoun before poking a shot past Darlow.

QPR failed to deal with another corner to allow Derbyshire to head in at the near post as Forest equalised again.

However, the home side produced a late flurry of goals to secure victory. Onuoha kept the ball in play before latching on to a Carroll pass and angling in a shot.

Morrison and Zamora scored in injury-time to wrap up the three points.

QPR assistant manager Kevin Bond: "We're delighted to have got the win we needed, that hopefully goes a long way to securing our play-off spot.

"It will be good to go into the play-offs with a bit of momentum. We haven't scored that many all season, so it was a good day.

"It's not an exact science, but you'd like to feel like a side in good form and with everyone sharp and fit."

"At 2-2 and with 15 minutes to go, I thought we looked the side more likely to get the third goal.

"To lose those goals right at the end is bitter for everyone. We had the opportunity to go on and win the game and we didn't take it. In the end, the score makes it look like we got a doing, but it wasn't like that."