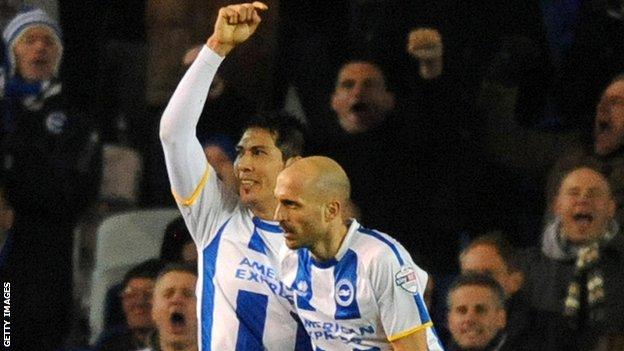 Brighton moved into the Championship play-offs with victory over Charlton.

Jesse Lingard's cool finish, his first home goal for the club, gave the Seagulls an 11th-minute lead, and Leonardo Ulloa doubled their advantage from close range on 43 minutes.

Jake Forster-Caskey's low shot sealed the win as Brighton climbed into sixth, ahead of Ipswich on goal difference.

The fourth defeat of Jose Riga's tenure as Charlton boss leaves his side a point clear of the relegation zone.

And they could have no complaints as the hosts deservedly swept them aside, keeping a 19th clean sheet in the league this season, the most in the Championship.

The Seagulls, who had lost their previous two home games, went in front when on-loan Manchester United forward Lingard skipped past Michael Morrison to score from the centre of the area after good work from Kazenga LuaLua.

LuaLua then forced Ben Hamer to race swiftly from his line, but the Charlton keeper claimed the ball at the winger's feet.

The visitors almost snatched an equaliser when a shot from Reza Ghoochannejhad deflected off Gordon Greer and came back off the bar.

But Ulloa doubled Brighton's lead with his 15th goal of the season after latching onto a short pass from Lingard.

The hosts continued to press after the break, with Hamer turning Lingard's goalbound shot round the post before the forward squandered an even better chance by shooting over.

Brighton assistant manager Nathan Jones: "We came out of the traps very quickly in front of an outstanding crowd and getting the early goal was vital.

"In a few games, opposing teams have nicked goals at the Amex so it was pleasing to get a second. We look to play possession football and have a cutting edge.

Jones on the Seagulls' play-off prospects: "With four games to go, we are in a fantastic position."

Charlton head coach Jose Riga: "This was certainly not the Charlton we saw on Tuesday in our win against Yeovil.

"But I knew before the game that we have spent a lot of hours travelling this week and that it would be difficult.

"Yet I am not here to complain, I am just here to find a solution and we have to think that we are still able to find a way out of it."