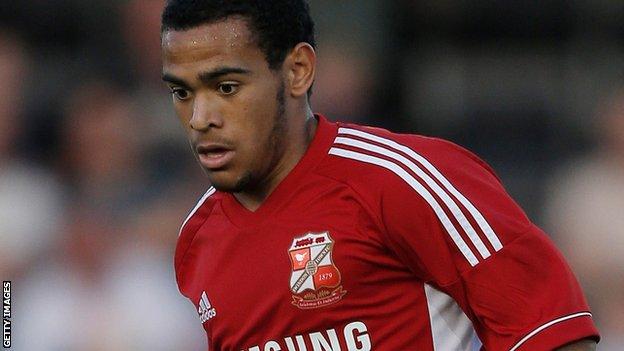 Swindon Town earned a surprising victory over promotion-chasing Brentford thanks to a first half Louis Thompson goal.

The Robins earned a penalty when Alex Pritchard was felled by Alan McCormack but David Button denied Michael Smith.

The hosts were ahead on half-time when Jonathan Douglas gave the ball away and Thompson coolly slotted home.

Brentford finished with 10 men when Adam Forshaw was shown a second yellow for a foul on Rafael Rossi Branco.

The result is Brentford's first loss in five but they remain in second spot, seven points ahead of third-placed Leyton Orient.

Swindon move up to seventh place, seven points off the play-offs.

"It was a proper game - like a cup final, end to end. Neither team left anything in the tank.

"I thought first-half we were very, very good. We played a system that tried to catch them on the break, we probably could have killed the game by half-time.

"Second-half we gave away too much possession, we didn't keep the ball well enough.

"Once they got in the lead they had that mindset that they were desperate to hang on to it."