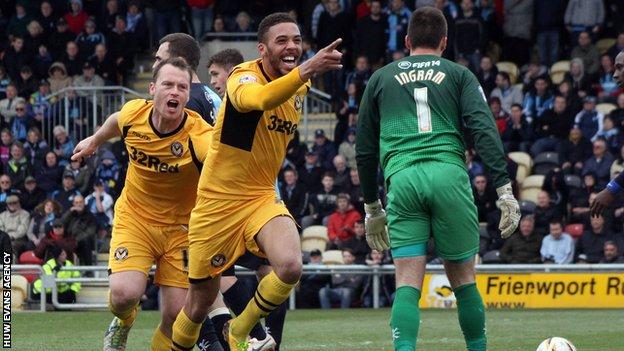 Christian Jolley claimed his first goal since the opening day of an injury-hit season by turning in Ryan Jackson's header from close range.

Chris Zebroski added a second within six minutes, sending a rasping shot into the roof of the net from 16 yards.

Wycombe are now one place above the drop zone on goal difference, after Northampton Town beat Burton Albion.

County's first home win in 10 games lifts them seven points clear of the relegation places with four games of the season remaining.

"I'm very happy, it's been a long time coming a win at home. I don't think we've been playing too badly but we've been getting punished for stupid mistakes.

"We didn't make the mistakes today and I thought it was quite an accomplished performance really.

"I didn't like the nerves I saw today. The second half performance was just unrecognisable.

"There's a lot of work to do this week and we've got a huge game, not just for Wycombe, but for their careers. The players have got to stand up and be counted.

"I don't think we stood up to the challenges today. I thought we were out fought, out thought, and out played, and it's cost us dearly.

"We're going to work on what we can this week because I want to put things right."