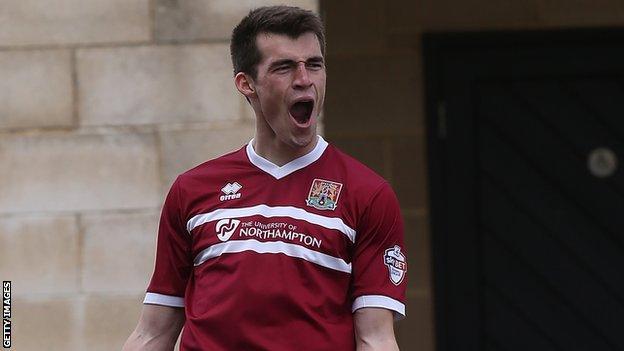 John Marquis struck to give relegation-threatened Northampton a crucial win against Burton Albion in League Two.

Burton went close to an equaliser when Adam McGurk's effort hit the bar.

Northampton nearly doubled their lead when Chris Hackett blazed over and a fine save from replacement keeper Dean Lyness denied Marquis a second late on.

The Cobblers' first home win in six games leaves them level on goal difference with third-bottom Wycombe ahead of the two sides meeting on Friday.

"We've done it together today and I'd like to thank the supporters for the help and backing they've given everyone on the pitch.

"It'll be a difficult game at Wycombe but hopefully we'll take a big following; we can go and win there, but we have to play well.

"Kelvin Langmead's done extremely well to get back to this stage after the injury he's been through. I like players like him, who put everything on the line for their club."