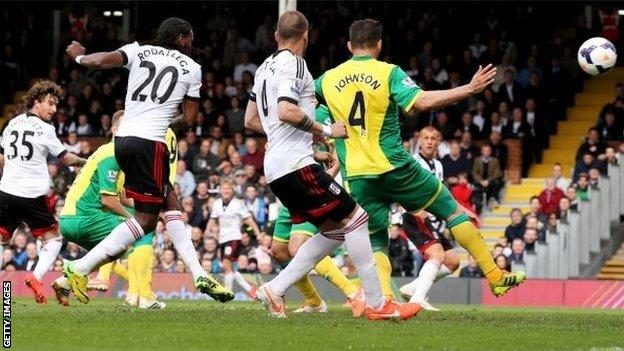 Hugo Rodallega scored the only goal to give Fulham a precious win in their relegation duel with Norwich.

Rodallega swept home Lewis Holtby's first-half free-kick after it had been flicked on by Steve Sidwell.

It leaves third-bottom Fulham just two points behind Norwich, who have a treacherous final four matches.

New Canaries boss Neil Adams will wonder how his side failed to gain any reward from three excellent chances before Rodallega struck.

But it is now three wins in five games for the Cottagers, who have responded positively to Felix Magath's appointment as their third manager of the season.

Adams had made his presence felt as manager just six days after the dismissal of Chris Hughton, making six changes to the Norwich starting line-up, including restoring Michael Turner, who had recovered from a hamstring injury to make his first appearance since 1 January.

Given the importance of the game, a cagey opening half-hour was not a surprise.

Norwich's Nathan Redmond had a shot saved by David Stockdale, while Rodallega failed to capitalise on a couple of half-chances.

But the game did not really come alive until Stockdale superbly turned away Ricky van Wolfswinkel's attempt to divert a low Martin Olsson cross into the net.

Leroy Fer forced Stockdale into another excellent save as he got his head to Redmond's near-post corner, before Bradley Johnson drilled a shot wide.

Norwich maintained the pressure and Robert Snodgrass had his head in his hands after his curling free-kick smacked against the crossbar.

The visitors had good cause to regret their profligacy before the break as Rodallega struck for the second successive game.

Holtby sent over a superb free-kick after Steven Whittaker fouled Kieran Richardson by the touchline, and Rodallega strode onto Steve Sidwell's near-post flick and swept home from four yards.

The Colombian almost had a second straight after the interval when he met Richardson's corner with a powerful header at the far post, only for Olsson to nudge it round a post.

Fulham's desperate need for points was shown in the way Brede Hangeland and Fernando Amorebieta closed in on Snodgrass as the Norwich man tried to reach Olsson's threatening pass deep inside the home penalty area.

Even Rodallega was helping out at the back and the striker was in just the right place to turn a goalbound Turner header over the bar.

Norwich remain outside the drop zone, but their run-in - Liverpool, Manchester United, Chelsea and Arsenal - leaves them in deep trouble as they try to preserve their top-flight status.