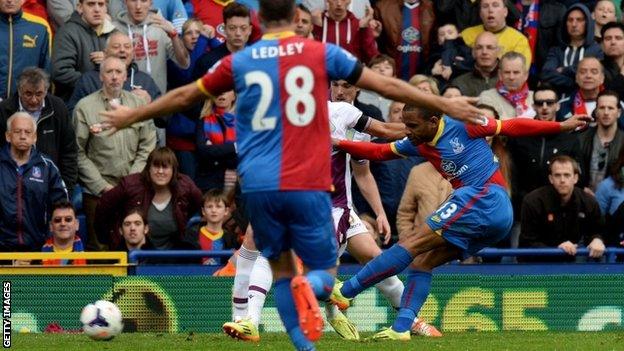 Jerome hit the crossbar, while referee Howard Webb appeared to award Palace a penalty only to reverse the decision.

Jason Puncheon found the bottom corner to secure a vital win and leave Villa only four points above 18th.

Prior to the match, Palace manager Tony Pulis said not even a victory over Villa would ease the fear of relegation but the Welshman will be a lot more relaxed than his counterpart Paul Lambert.

Palace improved as the match progressed and deserved the three points which take them to 12th in the table, seven points ahead of third-from-bottom Fulham, having played a game fewer than their London rivals.

Villa, perhaps understandably for a team attempting to avoid a fourth consecutive league loss, seemed nervous but that tension will only increase as the prospect of Championship football remains a real possibility.

They enjoyed the majority of possession, but it was a familiar tale for a side that has struggled to score this season, especially in the absence of injured top scorer Christian Benteke.

Jerome, Palace's biggest threat in the opening stages, booted the ball away three yards from his own goal when Julian Speroni seemed beaten by a Clark header.

Grant Holt went close for Villa, before Yannick Bolasie's penalty appeal was turned down when he went down under pressure from Holt, but no contact had been made.

Palace were engineering the best chances, with Bolasie and Jerome again at the centre of the action after the break.

Bolasie forced an acrobatic save from Brad Guzan and Jerome, two yards from goal, directed the rebound onto the crossbar.

Palace continued to threaten. Bolasie went close from close range, a Puncheon free-kick forced Guzan into action, and referee Webb initially awarded a penalty to the hosts before changing his mind after consulting with an assistant referee.

Again, Bolasie was the source of Villa's troubles but replays proved Nathan Baker had not handled the forward's cross.

Villa's best moments came after they fell behind, with Holt wasting a great chance and Speroni stopping a fine Andreas Weimann effort.

Aston Villa manager Paul Lambert: "We are a million miles from where we want to be.

"You're in that group and the only simple solution is to win the next game, that gives you the breathing space."