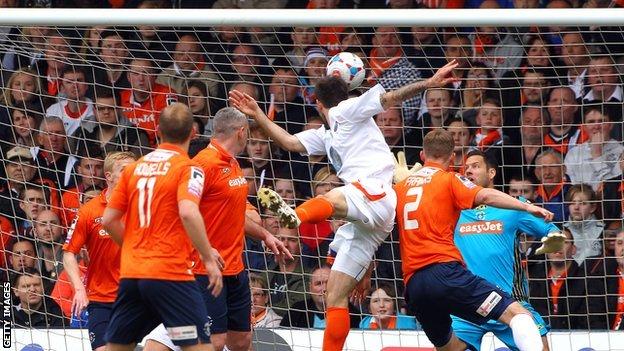 Ten-man Braintree held off a Luton fightback to delay their promotion back to the Football League.

Luton would have won the Conference Premier title with a win but Dean Wells and James Mulley put the Iron 2-0 up in 21 minutes.

Visiting keeper Nick Hamann was sent off before the break but Chez Isaac slotted home a third before Luton's Jake Howells scored from the spot.

Alex Wall struck from the edge of the area but they could not force another.

The Hatters are 10 points clear of second-placed Cambridge having played one more game than the U's but Richard Money's side - following a 7-2 defeat of Hyde - must win against Kidderminster and Lincoln in the next six days to keep their title challenge alive.

A total of 10,020 fans packed out Kenilworth Road, with most hoping to see their team get the victory they needed to win promotion after five years in non-league.

It got worse for the hosts with the play-off chasing Iron scoring from their next attack through Mulley's finish from Dan Holman's cross.

The Hatters, who had lost just once at home all season, were handed a lifeline before the break when visiting keeper Hamann was given a straight red card after needlessly charging out of his area and fouling Paul Benson.

Alan Devonshire's side were defending admirably and scored a third goal against the run of play in the second half when Isaac was left one-on-one with home defender Steve McNulty and kept his cool to finish well.

Just when it looked like the game was beyond Luton, visiting defender Ryan Peters was adjudged to have handled in the area and Howells scored confidently from the penalty spot.

The goal reinvigorated the home crowd and Wall's powerful strike took a deflection to fly into the back of the net and make it 3-2 with over 25 minutes to play.

Mark Cullen came close to levelling when his shot hit a post as John Still's side poured forward.

The Hatters failed to force replacement keeper Nathan McDonald into any more action of note but their promotion is surely still a matter of time.

"2-0 down is tough. 3-0 down is even tougher. I think we just had people out of position. When you're 3-0 down you don't give yourself a chance.

"I think our organisation and discipline let us down today. I'm the manager, I have to take a bit of responsibility. I set it out, if people haven't followed it, perhaps I haven't done my job properly."