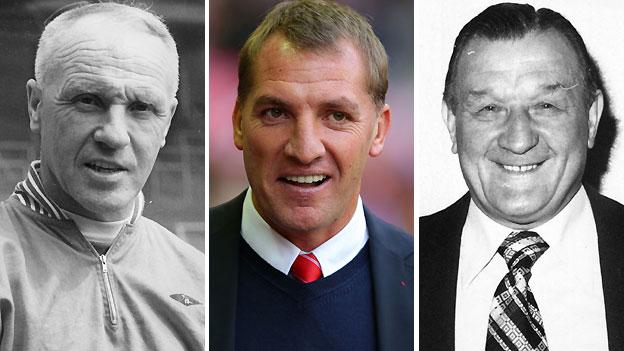 Keegan was signed from Scunthorpe by Shankly in 1971 and helped Liverpool win the league, European Cup, Uefa Cup and FA Cup during his six-year stint at Anfield.

How surprised have you been by Liverpool?

"As it happened they started off the season very well without him. He came back in and you thought: 'Will he be quite like he was and will there be any backlash from the suspension?' The answer was no. From the first second he got back on the pitch he has never stopped scoring goals. He has built up a great relationship with Daniel Sturridge.

"It has surprised me a little. I think what has helped them more than anything is the fact they got out of the other competitions.

"They have got both Chelsea and Manchester City to come to Liverpool, and if they win those two games the destiny of the title is in their own hands."

People are comparing Suarez with great Liverpool strikers such as Kenny Dalglish, Ian Rush and yourself - that is quite a big statement isn't it?

"I think he belongs right in there. He is just such a fantastic player. He should be the player of the year, with Eden Hazard and Yaya Toure probably the others that spring to mind. I can't think of anybody else who has had a season like him.

"He is going to break all records at a club like Liverpool. This is Liverpool, where you have had Kenny Dalglish, Ian Rush, Robbie Fowler, Michael Owen and yet he is going to break all those records if he stays fit. If you said to most people in this country that they had to buy a ticket to watch one player at the moment then I think most would go to watch Suarez as he is so exciting."

Do you see qualities in Brendan Rodgers that compare a little bit with a Bill Shankly or a Bob Paisley in the way Liverpool are doing things?

"If you look at the way the team is playing, the results they are getting and the way they are entertaining people, that is the key to Liverpool Football Club. It's OK to go and win games but at some clubs they want to see a bit more than that.

"Under Shankly, when he finally got it all going, and under Bob Paisley, they continued to entertain and beat teams - attacking home and away. Then there came a spell at Liverpool where some of the managers used to play just one forward at home and it wasn't great to watch. Liverpool fans had seen better and weren't impressed by it.

"I think they are certainly impressed by what Brendan Rodgers has done and it is exciting where it could go. It is Champions League football next season and that will be another big test for Liverpool. They will have the league to fight for, and the Champions League, and that is a massive strain on your squad.

"This is their year if they are going to do it. If they beat Manchester City and Chelsea at home - providing they don't slip up in some silly place - the title could be theirs.

"What I like about this era for Liverpool is they are better going forwards than back. That is always a good thing. We are getting away from this old-fashioned way of teaching people in coaching that if you don't give away goals you don't lose matches.

"All the rules for the last 10-12 years, maybe beyond that, have been saying go forward. All the rule changes have been positive to say to teams to attack. Liverpool are doing that and that is why, if they do win the league this season I will salute them, because they will have done it in style.

"They will have done it in a way which has been entertaining and in a way the neutrals will say: 'I don't mind them being champions because they play the game the way I like to see it played'."

Who will win the title?

"Whoever wins that game at Anfield between Liverpool and Manchester City will win the title. If it is a draw, it throws it right back in the pot again. Chelsea are close behind.

"It is an exciting season and that's what we want as football fans. Anyone can win the league from those three teams. Chelsea aren't out of it, Manchester City are slight favourites because they have had the experience but Liverpool are in the driving seat if they win all their games at home against the big boys."