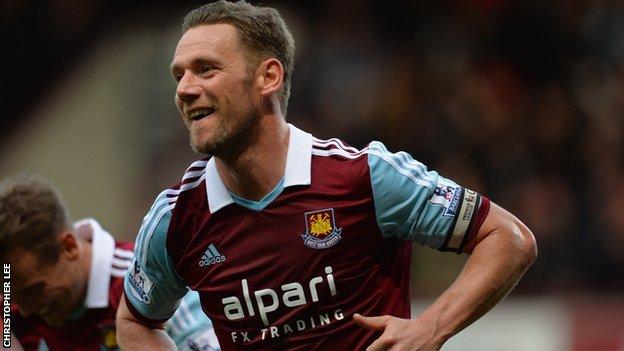 West Ham captain Kevin Nolan will be fit to face Liverpool after recovering from the back injury he suffered in Monday's win over Sunderland.

However, Hammers defender George McCartney is expected to miss the match with a hamstring problem he picked up in the same game.

Liverpool manager Brendan Rodgers has no new fitness concerns for this match.

Jose Enrique, who has been absent since November with a knee injury, has been ruled out for the rest of the season.

Liverpool are attracting global recognition after their wonderful unbeaten 2014 league run has seen them rise from outsiders for a top-four place to title favourites in many eyes.

Brazil's World Cup-winning captain Cafu has taken a shine to England prospect Jon Flanagan with the legendary full-back taking to Twitter after the table toppers' romp over Spurs: "Good to see the Red Cafu is playing well".

Brendan Rodgers says the team are enjoying their position at the summit but the immediate task is this banana-skin game. Imagine if they beat Manchester City and Chelsea in the coming weeks but lose out on the title because they lost at West Ham. They wouldn't be able to forgive themselves.

"Pessimistic Liverpool fans might look at this game and think that ex-Reds Stewart Downing and Andy Carroll will be lying in wait, and so will West Ham boss Sam Allardyce.

"For this game, I can see Allardyce denying Liverpool space to play and looking to hit Carroll early with the ball, then trying to get bits and pieces around him from his knockdowns."

Andy Carroll will be determined to prove Rodgers made a mistake by selling him. If Cardiff could expose frailties in the league leaders' defence, the West Ham battering ram will be licking his lips and Kevin Nolan will profit from Carroll's knock downs.

What must be going through the home captain's mind? A Liverpool fan, raised in Toxteth, Nolan played for the club as a very young schoolboy and admits the Reds have a special place in his heart. If he nets the winner West Ham will virtually be safe but he could have killed Liverpool's dream.

On form, a home winner is unlikely. Suarez is hunting his 30th goal. Sturridge has 23. Gerrard has nine in his last 14 games. Many neutrals would love to see him lift the trophy and Rodgers rewarded with the title ahead of schedule.

I have met many different kinds of manager in my 41 years involved in football. He is one of the most genuine, thoughtful and quietly inspirational men I have encountered.

Given that West Ham have won only two of 16 matches against top-half teams all season, I can't see Liverpool losing this, but I have a sneaky feeling that the Upton Park boo-boys may change their tune and inspire their team to a point.