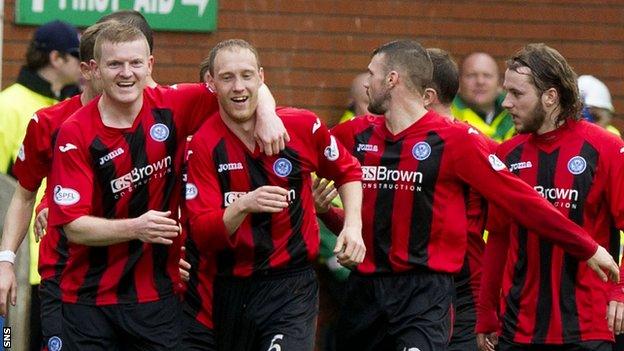 Tommy Wright says St Johnstone will go into their Scottish Cup semi-final full of confidence, after they came from behind to win 2-1 at Kilmarnock.

The Perth men trailed to a Robbie Muirhead goal, but bounced back to win through Frazer Wright's header and Steven Anderson's back-heel finish.

And Saints boss Wright insists the display will boost his troops ahead of next Sunday's meeting with Aberdeen.

"It was the perfect preparation for next week," he said.

"The performance and result will give them confidence.

"Our away record has been really poor this season. That is only our fourth away win in the league, so I'm really pleased we have got another."

Skipper Dave Mackay made his 200th appearance for the club in the victory, but it was his defensive colleagues Wright and Anderson who proved to be the matchwinners.

"We haven't scored enough goals from set plays," added Wright. "We get great deliveries from the likes of David Wotherspoon and Lee Croft but we haven't made the most of that this season.

"However, Frazer Wright has done really well to get across his man for the first, while Ando's finish is just quality."