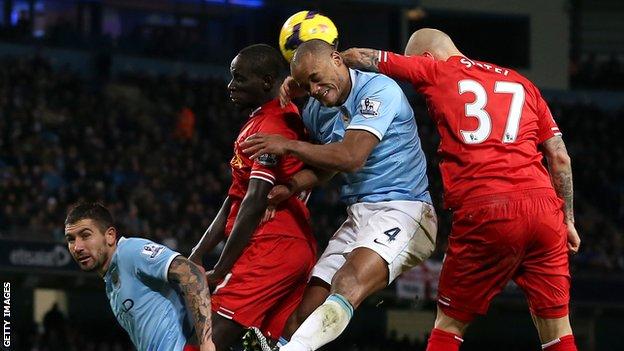 Second-placed Liverpool are a point ahead of City in the Premier League and the sides meet at Anfield on 13 April.

In their last meeting, at Etihad Stadium on Boxing Day, Kompany scored as City came from behind to win 2-1.

"They are the strongest team we have played this season," Belgium international Kompany, 27, said on Match of the Day.

"They have a great squad and they are not there by luck."

Third-placed City beat Southampton 4-1 on Saturday, while Chelsea returned to the top of the table at Liverpool's expense with a 3-0 win over Stoke City later in the day.

Liverpool travel to West Ham on Sunday, after which City will have two games in hand on both their title rivals.

"We have different styles but the same philosophy of trying to score goals, so I think it will be an entertaining game," Kompany said of next weekend's trip to Anfield.

"It's hard to predict because so much is at stake, but we remember the game we played at the Etihad and I'm not surprised at all [that they are challenging for the title].

"Our strongest part of the season when we won the league [in 2011-12] was when we had no other competitions to play in, and Liverpool have had that this season."

But Kompany said: "If I was in Chelsea's position I would still believe. It's going to go to the wire."