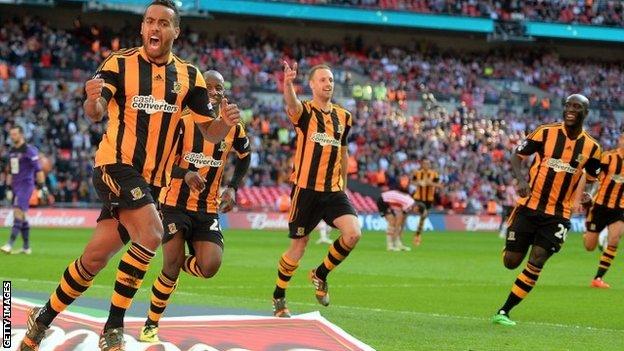 Hull City reached the FA Cup final for the first time in their history after they staged a second-half fightback to defeat a spirited Sheffield United in a pulsating semi-final.

The Blades took the lead when Jose Baxter stabbed in, and although Hull levelled through Yannick Sagbo's close-range finish, Stefan Scougall smashed in to restore Nigel Clough's side's lead.

Hull turned the game around early in the second half when substitute Matt Fryatt swept in and Tom Huddlestone scored a classy solo effort before Stephen Quinn headed home.

Jamie Murphy's late strike set up a tense finale but David Meyler sealed the win with a composed finish in injury time.

The result means Hull will return to Wembley on 17 May to play Arsenal in the final.

For 45 minutes, Steve Bruce's side had looked as though they were on course to suffer a shock as the League One Blades twice seized the lead.

• Hull City had only once previously reached the FA Cup semi-final, where they lost after a replay to Arsenal in 1930.

• Sheffield United became the ninth club from outside the top two divisions to reach the last four.

The defeat denied Clough the chance to at least replicate the achievement of his father Brian, who had guided Nottingham Forest to the 1991 FA Cup final, where they were beaten by Tottenham.

But he will undoubtedly be proud of his players' efforts as they showed they were not overawed by Premier League opposition.

United took the game to their opponents from the outset as they hassled and harried the Hull defence, looking for a moment to catch out their higher-division opposition.

That arrived midway through the first half when the ball found its way to John Brayford on the right and the defender crossed low towards the near post where Baxter stuck out a boot to poke the ball beyond Steve Harper and send the Blades' fans wild.

But when the Premier League side finally tried to attack with the ball on the ground, it resulted in an equaliser.

Jake Livermore threaded a fine ball through the defence to give Sagbo time and space to smash a shot into the roof of the net.

For a few moments, it seemed that strike would signal the beginning of the end of United's FA Cup dream but they showed superb spirit to respond immediately, this time Murphy crossing low for Scougall, arriving late into the box, to make no mistake with a ferocious finish.

Bruce responded to his side's poor first-half display by bringing on Fryatt and Sone Aluko for George Boyd and Maynor Figueroa and the changes had an immediate effect as Hull quickly scored twice to stage a remarkable turn-around.

First, James Chester poked the ball to Fryatt inside the area following a corner and the United defenders could not react quickly enough to prevent the striker from sweeping in from four yards.

Bruce, conscious of the fact his side had switched off immediately after their first goal, urged his players to push on straight from the restart and within a matter of minutes Hull took the lead.

This time, Huddlestone raced into the area after playing a one-two with Meyler before clipping the ball confidently beyond the reach of Mark Howard.

Bruce made his third and final change midway through the half and once again it paid dividends as Quinn headed in from Livermore's ball just minutes after coming on against his former club.

That looked to have knocked the fight out of the Blades but there was still time for late drama as Murphy pounced on a loose ball to volley in.

That briefly gave Clough's side hope but moments later Meyler finally ended their giant-killing run when he raced on to Ahmed Elmohamady's through-ball to finish.