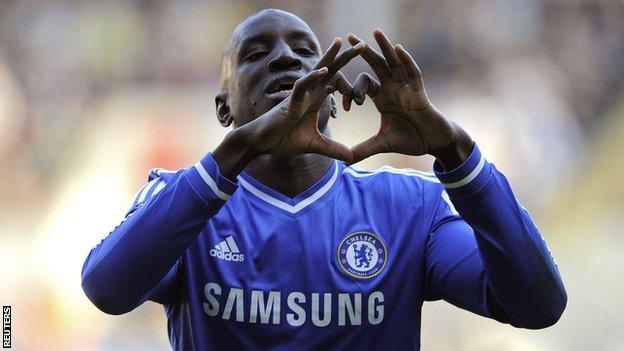 Swans defender Chico Flores was sent off in the 16th minute after being booked twice inside 120 seconds.

However, it took Chelsea until midway through the second half to take advantage with Demba Ba's goal.

It was the second time inside a week that the striker has been the Blues' match-winner, having scored the winner against Paris-St Germain on Tuesday.

But Chelsea's concerns are at the other end of the table, with a victory vital for Jose Mourinho's side after Liverpool's 3-2 win against Manchester City earlier in the day.

That triumph moved the Reds five points clear of their London rivals, but the Stamford Bridge side returned that gap to two - and moved five ahead of Manchester City - with four Premier League matches remaining.

Chelsea's run-in includes a visit to Anfield and Mourinho's men needed three points in Wales to keep the pressure on but the game was an open encounter before Flores's dismissal.

Chelsea should have led inside five minutes, Mohamed Salah hitting the outside of a post with the goal at his mercy after Branislav Ivanovic's low cross found him in space 10 yards out.

However, Swansea also looked full of attacking intent and Petr Cech was called into action to turn Wilfried Bony's header over the crossbar.

The complexion of the match would soon change, though.

Flores, who had been booked for bringing down Willian just a minute earlier, fouled Andre Schurrle and, after a long delay, referee Phil Dowd showed the Spaniard the red card, provoking a furious response from Swansea head coach Garry Monk.

Consequently, Chelsea pinned back Swansea for the majority of the half, Salah missing another fine opportunity after a neat lay-off from Ramires.

However, such chances were scarce and their profligacy left the visitors vulnerable to counter attacks. Indeed, from one such Swansea break, Cech again had to produce a fine save to turn Nathan Dyer's 25-yard drive behind after it had deflected off Cesar Azpilicueta.

Knowing that Liverpool had stretched their lead at the summit, Mourinho supplemented his attack by introducing Samuel Eto'o to partner Ba as Chelsea laid siege to the Swansea goal. Both strikers went close to making the breakthrough, as did Oscar, but a goal was still not forthcoming.

The Blues' frustration grew, perhaps informed by a run of three consecutive away defeats and their failure to keep a clean sheet on the road since February's win at Manchester City. And things nearly got worse.

Swansea winger Wayne Routledge surged forward and his shot deflected off John Terry's back, beyond Cech, but narrowly wide of goal.

However, Chelsea's nerves were settled shortly after, Ba latching on to Nemanja Matic's long pass before firing the ball into the net.