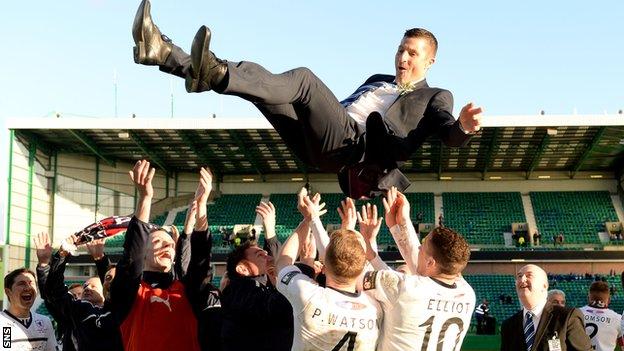 Raith Rovers manager Grant Murray spoke of his pride in his players after they defeated Rangers 1-0 after extra-time to lift the Ramsden Cup.

John Baird's late winner settled a tight contest and took the cup to Kirkcaldy for the first time.

"It wasn't a great game, but at this stage it's all about lifting the trophy," Murray told BBC Scotland.

"To come here to Easter Road in front of 20,000 and beat Rangers in a cup final is fantastic."

With the game destined for penalties, Baird pounced on Greig Spence's rebounded effort to send the large Rovers support wild.

"We knew it was going to be difficult, they're a quality side," said Murray. "It wasn't the greatest game in the world, but they've all got a gold medal up there."

You look at the fans we've got, it's fantastic for them, the town of Kirkcaldy and everyone involved with the club

"I thought he was outstanding - he was a rock at the back," he said of Hill.

"Lee Robinson's been fantastic in the game, too, he's pulled off right good saves when we were under pressure a wee bit.

"It's difficult to single anybody out. I think it was wee Bairdy that got the goal and they're heroes, they're absolute heroes now.

"I'm just so proud of them. You look at the fans we've got - [they were] very outnumbered today - but it's fantastic for them, the town of Kirkcaldy and everyone involved with the club. This is going to live with them for the rest of their lives."

Goalscorer Baird was released by Partick Thistle in January but became the cup final hero within three months of his move to Fife.

Baird said: "It's an absolute dream, just a dream. To score a winner in a cup final against one of the Old Firm it's what everybody dreams of if you're not playing for them.

"It rebounded off the goalkeeper and I fancied my chances and hit the back of the net.

"That's the Rangers team we've gone and beat in a cup final. For Raith Rovers to do that is unbelievable when we have been written off all week.

"You saw it at the bookies, the clippings in the paper this morning - it just fired the boys up."