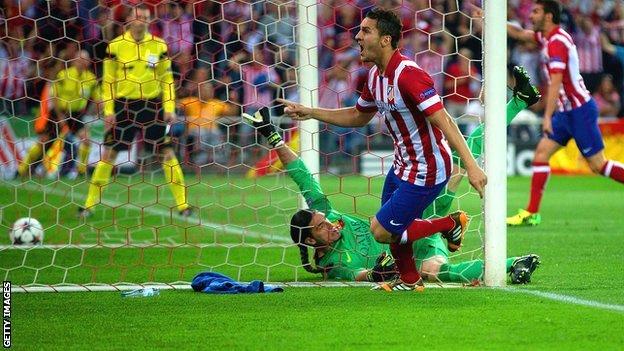 Atletico Madrid knocked Spanish rivals Barcelona out of the Champions League as Koke's early goal gave them a 2-1 aggregate win over the Catalan giants.

The midfielder's close-range shot put the Spanish league leaders into the semi-finals following the 1-1 draw in Barcelona last week.

Gabi wasted a fine chance for Atletico after the break while Neymar went close with a diving header for Barcelona.

Koke's goal was his first in European competition, and came in the 22-year-old's 31st outing for Atletico in either the Champions League or Europa League.

The result puts Atletico into the last four of the competition for the first time since 1974, and with Diego Simeone's side heading La Liga by a point from Barcelona with six games remaining, a domestic and European double is a distinct possibility.

Barcelona counterpart Gerardo Martino, by contrast, must contemplate the fact that his side have become the first Barca team to fail to reach the semi-finals of the Champions League since 2007.

Four previous meetings between the two sides this season - in La Liga, the Spanish Super Cup and the first leg of this tie - had all ended in draws, but Atletico began the match positively rather than being content to rest on their away goal advantage.

Adrian Lopez, in the side for Diego Costa with the prolific striker ruled out by a hamstring injury, shot against the post in the fifth minute, but within seconds Atletico were ahead.

Former Barcelona forward David Villa collected the rebound to cross from the left, and after Raul Garcia nodded back across the face of goal, Koke - recently called "an extraordinary footballer" by Barcelona's Xavi - stabbed the ball past Barca goalkeeper Jose Manuel Pinto.

There was no respite from Atletico, who came close to killing the tie off before the 20-minute mark, with Villa hitting the post and then the crossbar.

Atletico last made the semi-finals of this competition in 1974, when they beat Celtic 2-0 on aggregate. They held Bayern Munich 1-1 in the final, but lost the replay 4-0.

Argentine superstar Lionel Messi had headed just wide in between Villa's two efforts, and although the Catalans improved as the game developed, they failed to consistently test Atletico goalkeeper Thibaut Courtois.

Diego, scorer of the crucial away goal in the first leg, forced Pinto into action with a fierce shot from a tight angle after Atletico had soaked up Barcelona's pressure in the early part of the second half.

Gabi's weak shot at the feet of Pinto wasted another chance for the hosts, who soon had a penalty claim ignored by referee Howard Webb after Villa had gone down under a challenge from Javier Mascherano.

Neymar's header, 13 minutes from the end, was inches wide of Courtois' right-hand post with the on-loan Chelsea player struggling to get near the ball, but Pinto was the busier of the two keepers in the final stages as Atletico claimed a memorable win.