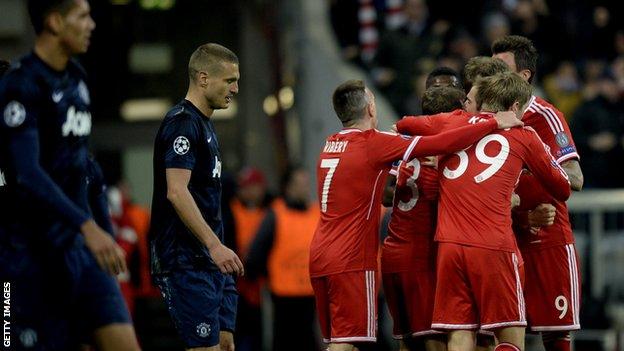 Manchester United's hopes of redeeming a poor season with a surprise Champions League semi-final place were ended as holders Bayern Munich fought back to record a dominant second-leg win.

David Moyes's side had held Bayern to a 1-1 draw at Old Trafford and stunned the hosts when Patrice Evra rifled in.

But Mario Mandzukic nodded in a swift equaliser before Thomas Muller's scuffed finish put Bayern ahead.

Arjen Robben then wrapped up the 4-2 aggregate win with a fine solo goal.

"Bayern are a good side but they will come up against more difficult opposition than Manchester United.

"If it had been last year or the year before, I think United would have won. If United had come out at Old Trafford like they did in the second half tonight it may have been a different game. They didn't do it enough over the two games."

With United already out of the Premier League title race, FA Cup and League Cup, the Champions League had been Moyes's final chance to redeem what has been a hugely disappointing season for the 2012-13 league champions.

They had been given little chance against a Bayern side who have been imperious this season, but United had produced a dogged defensive display at Old Trafford to give themselves hope heading into Wednesday's encounter.

United needed to score at Bayern to have a chance of progressing and, with that in mind, Moyes named an attacking line-up with Wayne Rooney, fit after recovering from a toe injury, leading the line in front of Danny Welbeck, Shinji Kagawa and Antonio Valencia.

It almost paid dividends inside the first 10 minutes when a long ball over the top gave Rooney space to run at goal but the England striker hesitated on the edge of the area and his shot was blocked.

Valencia had an effort ruled out for offside soon after, before Bayern took control of the game. But for all their dominance in possession they did not force United goalkeeper David De Gea into a save in the first half.

Their short, sharp passing was creating opportunities but decision-making in the final third was letting them down, although Robben caused an all-too-brief moment of excitement just before half-time when he pounced on a loose ball and jinked his way into the area, only to see his shot deflected wide by Chris Smalling.

That pattern of play initially continued in the second half, but just as the hour mark approached the game finally exploded into life.

United stunned the home crowd when Valencia beat his man on the right to cross into the box where the ball was cleared only as far as Evra, who raced to the edge of the area and smashed a fine strike off the underside of the crossbar and into the net.

The goal had Moyes and his coaching staff punching the air with delight, but the celebrations were all too brief as Bayern responded immediately.

From the kick-off, the ball found its way to Ribery on the left and Mandzukic stooped in front of Evra to head his low cross beyond De Gea.

Suddenly the game opened up as Rooney failed to connect properly with a shot from a promising position, while Bayern's Mario Gotze saw a header saved.

It was the home side, though, who got the crucial second goal when Robben's low ball into the area was turned in from close range by Muller.

That strike galvanised Bayern as they set about harrying a rattled United defence, Evra earning a yellow card for bringing down Robben when he charged towards the area.

But Robben could not be stopped from putting the game beyond the visitors when, with defenders backing off, he ran across the edge of the area before slipping a low shot just inside the post.

United famously scored twice in injury time to overturn a one-goal deficit and beat Bayern in the 1999 Champions League final, but there was to be no repeat of such heroics in this game.

The home side eased to victory without further alarm to join Atletico Madrid, Chelsea and Real Madrid in Friday's semi-final draw.

For a photo gallery of Wednesday's Champions League action, head to the BBC Sport Facebook page.