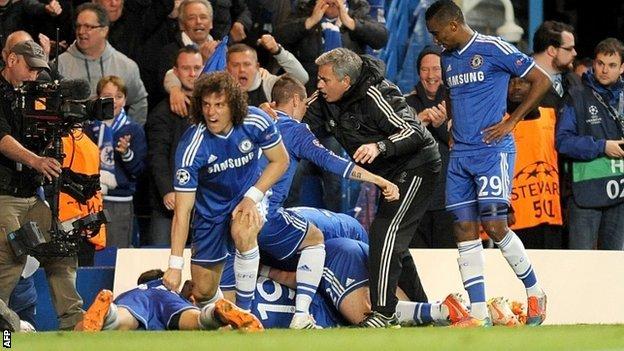 Chelsea needed to claw back PSG's 3-1 advantage from the first leg and Andre Schurrle - on as an early substitute for the injured Eden Hazard - gave them hope with a first-half goal.

And with only three minutes left Ba, another substitute, bundled the ball home from six yards to make the decisive contribution and spark wild celebrations as the Premier League side went through on away goals.

"Cech, Terry, Luiz, Lampard ran for each other all night long. However poorly you play, you will always get chances - no matter how good the team you are playing. PSG are very direct but never really fashioned too many chances tonight. In the end it could have been more comfortable for Chelsea.

"For a lot of games at Stamford Bridge the atmosphere hasn't been great - tonight it was fantastic."

Mourinho, in scenes reminiscent of his famous sprint down the Old Trafford touchline in 2004 when Porto knocked out Manchester United on the way to winning the Champions League, raced to join his players as they mobbed Ba.

He then pulled players from the celebrating pile to issue some final orders as the Blues held out to complete the turnaround.

Ba's finish came just as Chelsea looked to be on the way out after Schurrle and Oscar were both denied by the woodwork - although the London side were helped by a crucial miss from the normally reliable Edinson Cavani minutes before the decisive goal.

And goalkeeper Petr Cech, heavily criticised after that first-leg loss, redeemed himself with a superb save from Marquinhos in stoppage time to prevent PSG snatching the tie back at the very last.

It will be Mourinho's third Champions League semi-final in charge of Chelsea - and he will be hoping it proves third time lucky after losing his previous two to Liverpool.

With a Premier League title challenge still very much on, this season holds the promise of serial winner Mourinho adding at least one more trophy to his collection.

The Portuguese was able to recall fit-again Samuel Eto'o in attack but suffered the major setback of losing Hazard to injury early on - although substitute Schurrle more than made his mark.

It was the German who gave the hosts the lift of the crucial opening goal after 32 minutes. Visiting boss Laurent Blanc was left furious after his defence failed to deal with Branislav Ivanovic's routine long throw, as Schurrle had time and space in the area to sweep home from David Luiz's touch.

PSG had shown little attacking ambition without the injured Zlatan Ibrahimovic and continued to hand the initiative to Chelsea at the start of the second half, when only the woodwork stopped the Blues levelling the tie on aggregate, backed up by that crucial away goal in Paris.

Schurrle was unlucky to see his effort beat keeper Salvatore Sirigu and rebound off the bar, while Oscar suffered a similar fate with a 20-yard free-kick seconds later.

32 mins: Schurrle opens the scoring with a low shot from 10 yards

87 mins: Demba Ba scores the close-range goal which sends Chelsea into the semi-finals

Cech had been little more than an observer to this point but had to show great athleticism to turn away Ezequiel Lavezzi's angled effort.

Mourinho made an attacking change with 24 minutes left, Ba getting the nod ahead of Fernando Torres to provide extra threat when Frank Lampard was replaced.

As PSG tried to cash in on Chelsea's increasing urgency, Cavani - of whom little had been seen - hinted at his danger with a powerful volley that flew narrowly over.

The Uruguayan then had an even better chance to kill Chelsea off when he was released by a magnificent pass from former Newcastle midfielder Yohan Cabaye. The entire PSG bench were off their feet in anticipation as Cavani raced through, only for the striker to fire over the top with just Cech to beat.

As the game entered its last 10 minutes Mourinho played his final card, sending on Torres for the tiring Oscar, but it was Ba who was the man on the spot to provide that dramatic finale and ensure a place in Friday's semi-final draw.

Check out a photo gallery of Tuesday's Champions League action on the BBC Sport Facebook page.