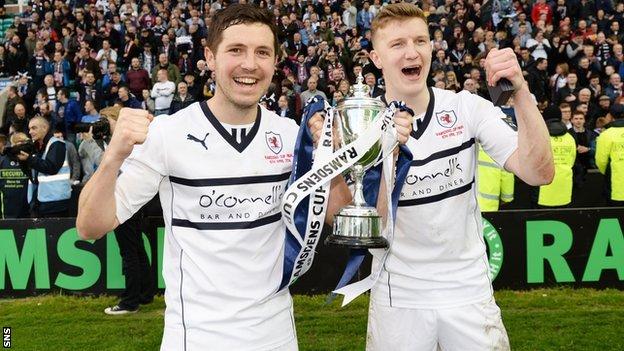 Raith Rovers shocked Rangers with a goal late in extra-time to lift the Ramsdens Cup for the first time at Easter Road.

BBC Scotland pundits Derek Ferguson, who played for both finalists, and Billy Dodds, who is a former Rangers striker, here give their marks out of 10 for the two sides.

The former Rangers goalkeeper made some excellent saves and kept Raith Rovers in the game. If it was not for the heroics of defender Dougie Hill, Robinson would have been man of the match.

Raith Rovers' captain was sound and solid throughout and the full-back worked hard down the right.

Rovers' two central defenders coped with everything Rangers threw at them. The imposing Jon Daly was kept quiet, which says it all.

The central defender was man of the match for his show of great bravery, staying on after picking up a shoulder injury and playing through the pain barrier in extra time.

Like Thomson, Booth got forward when he could from his full-back position and also defended soundly. On home turf, the on-loan Hibernian defender had his hands full against Fraser Aird, who was Rangers' biggest threat, but coped reasonably well.

Wingers sometimes get lazy but, over the piece, Anderson did his job well defensively and showed real energy in getting forward, too.

He stayed back for much of the match but made a solid contribution and was tidy in distribution as part of Rovers' holding midfield duo.

Along with Fox, Moon did his defensive duties and picked his moments to go forward.

The winger worked his socks off and showed plenty of energy as well as doing his job in defence.

The winning goal was great compensation after it did not work out for the striker with Partick Thistle. He worked hard up front without much service.

Another who was back in familiar territory, the former Hibs man fitted well into the defensive midfield role vacated by Moon.

The former Celtic youth lacks a bit of quality at times but looked threatening when he came on and set up the winner.

Gordon Smith (on for Elliot after 86 minutes) 6

The former Hearts striker put in a good shift when he came on.

The goalkeeper is one of the few Rangers players to get pass marks. He had a couple of routine saves before stopping Greig Spence's effort but was unable to stop John Baird on the rebound.

As an experienced player, the former Aberdeen and Bristol City full-back needed to contribute more. Poor distribution got him in trouble and he had a hand in the errors that led to the winning goal.

Rangers did not play to the strengths of the Scotland left-back. They did not use his athleticism to their advantage, although he did force one save from the goalkeeper.

The Rangers captain is usually reliable, but a poor clearance contributed to the winning goal. He picked the worst time to have his worst display of the season.

The Frenchman had a nightmare. His distribution was dismal, he slipped in the lead-up to the goal and twice headed over from close range.

At the moment, he has the Rangers fans on his back in a similar way to Charlie Adam because, rather than play the simple pass, he is trying another World Cup pass after five have already failed. The central midfielder looks a pale shadow of the player he was at Hearts.

The game by-passed him in central midfield, where he seemed unsure of his role.

The winger was Rangers' biggest threat in the first half. He faded after the break but showed good appetite for a young man.

He is a left-back playing as a left midfielder and it looked like it. However, he did force a good save with an excellent free-kick.

The striker so impressive last season for Dundee United was hardly in the game and looks to lack confidence and fitness. He had no service and did not impose himself on the Rovers central defenders.

Law appears to be another who has been dragged down after joining Rangers. He did have a shot that hit a post, but he is not impressing in midfield the way he did with Motherwell.

The defender made no impact on the game after replacing Wallace and his distribution was poor.

The striker tried hard enough, but nothing came off for him and his one shot was saved.

It was a surprise that the young forward was not brought on earlier considering his recent performances. He was not given enough time to make an impact.