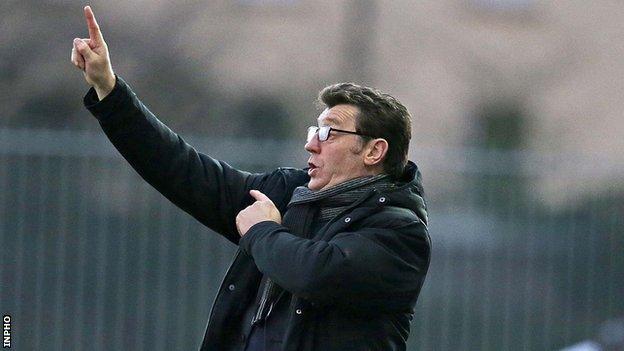 Derry City proved no match for a classy Dundalk team at Oriel Park as the Candystripes's struggles under new boss Roddy Collins continued.

Play was held up for over 10 minutes in the first half after Derry's Ryan McBride was hurt in a collision.

McBride was reported to have spoken to paramedics as he was taken to hospital.

Brian Gartland headed Dundalk into the lead on 63 minutes with Richard Towell doubling their advantage on 74 and David McMillan scoring the third on 90.

The worrying injury suffered by their colleague may have affected Derry concentration but all the same, the paucity of the visitors's challenge on the night must have been a concern for all connected with the club.

Dundalk showed the greater invention from the off as O'Donnell went close early on and Andrew Boyle's cross then only needed a touch with the Derry defence again marked absent.

Dane Massey headed a glorious Dundalk chance over after Pat Hoban had nodded on a Kurtis Byrne cross but play was then halted after McBride's sickening collision with Hoban.

There was huge concern as five paramedics treated the defender on the pitch before he was eventually stretchered off the pitch after a 15-minute delay in play.

As Dundalk continued to dominate, Byrne had the ball in the net on 60 minutes before the effort was ruled out for offside.

However, the inevitable goal came on 63 minutes as Gartland rose unchallenged to head past Gerard Doherty.

The game was up for Derry on 74 as a lightning Dundalk break was finished off by Towell lofting over the Derry keeper.

Doherty made a great save to deny Towell on 87 but substitute McMillan slotted Dundalk's third goal in injury-time after Dean Jarvis had failed to deal with a long ball.