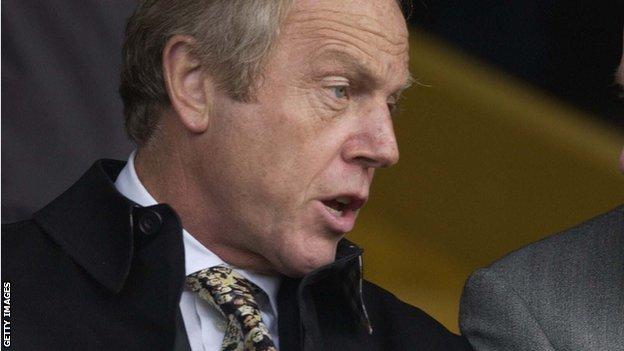 Hereford United have been granted a seven-day adjournment by the High Court to settle their outstanding tax bill.

The Conference Premier club were still £4,000 short of their £78,000 target at Monday's hearing in London to answer a winding-up petition.

But they believe that money raised over the weekend will meet the shortfall.

Part of that will come from Bulls FA Cup legend Ricky George who donated his £1,500 Grand National winnings to help the club reach their survival target.

"On behalf of the board I'd like to thank the supporters for their fantastic efforts in helping us to reach our goal," said Preedy.

"Once we take into account the kind donations from supporters, the gate receipts from Saturday's game and the amazing £21,000 raised from the Omid Djalili shows on Sunday, then we can say we have enough money to pay the HMRC bill.

"Our efforts must now turn to paying the outstanding wages owed to the players and staff who have continued to work hard in difficult circumstances."

George scored the Bulls' winning goal in their FA Cup fourth round victory against Newcastle United at Edgar Street in 1972, minutes after Ronnie Radford had rifled home the most famous goal in the club's history from 30 yards.

But the horse racing fan enjoyed another major sporting highlight 26 years later when he himself was a Grand National-winning owner, jointly owned a sixth of a share in 1998 winner Earth Summit, trained in Gloucestershire by Nigel Twiston-Davies.

George's bonus came on top of the £21,000 raised by two fund-raising stand-up shows put on by London comedian Djalili.

Hereford United's attendances have halved in five seasons on their way down from League One to the Conference Premier.

The Chelsea fan, who had already sold out a show at Hereford's Courtyard Theatre on Sunday evening, also offered his services for free to put on a second show earlier in the day.

Brewing company Heineken, who own Hereford cider-makers Bulmers, also gave a cheque for £10,000.

And a further £2,300 was donated at Saturday's home game with Woking, which ended in a 2-0 home defeat - to extend the Bulls' run without a win to 13 games, still a point clear of the relegation zone.

The Bulls, who have been struggling financially ever since being relegated from the Football League in May 2012, avoided a winding-up order in late January over the non-payment of their £36,800 PAYE bill for November and December.

The club also faced a similar situation in 2013 but were able to settle thanks to a £70,000 payment from their televised FA Cup first-round tie against Cheltenham.

The Conference Premier club have attracted average home crowds of just 1,723 this season - half of what they pulled in at Edgar Street five years ago - and are still losing money by the week.

Needing home crowds of 2,000 to break even, Bulls fans responded at last week's home game with Grimsby Town, swelling the gate to 2,545 - but that dropped to 2,140 on Saturday.