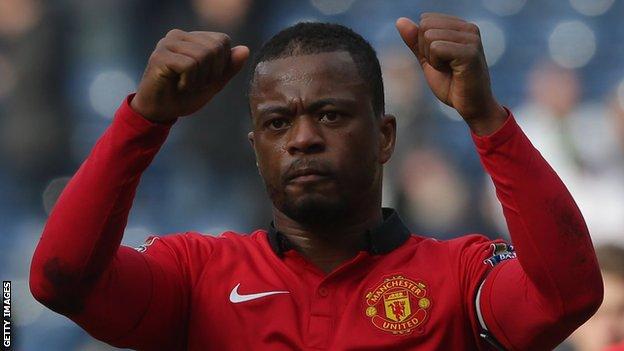 Manchester United's Patrice Evra says it is "painful" the club are only vying for one trophy but hopes to emulate Chelsea's Champions League win in 2012.

United are tied at 1-1 heading into the second leg of their quarter-final at holders Bayern Munich on Wednesday.

"Our season reminds me of the Chelsea season when they were not playing well in the league," said Evra.

"It's unusual to say you can save your season in one game, it's painful. Now we have to make sure the fans are proud of the second leg at Bayern."

In the Champions League we play good, we are confident and it looks like we are all up [for it] more than in the league or the cup

Left-back Evra, 32, missed the first leg with a knee injury but expects to be fit for the game in Munich after starting the 4-0 victory at Newcastle on Saturday.

United have the best away record in the English top-flight this season but have struggled at home.

They are seven points off a top-four place needed to secure a slot in next season's Champions League but could qualify by winning this year's competition.

Evra knows United face a tough ask overcoming Bayern to create a "shock", although he says United's best form has come in Europe so far in the current campaign.

"In the Champions League we play good, we are confident and it looks like we are all up [for it] more than in the league or the cup," he said.

"It's not professional to say it but it is the truth. We look more like we are on it and with more like the Manchester United spirit."