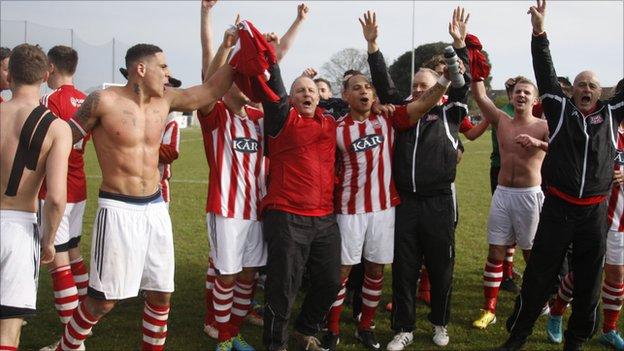 Sholing boss Dave Diaper paid tribute to his players after they sealed a place in the final of the FA Vase.

The Boatmen beat Eastbourne United 4-2 on Saturday to record a 6-4 aggregate semi-final win and secure a date with West Auckland FC in May's final.

It will be the Wessex League Premier Division club's first visit to Wembley.

"We've got there [Wembley]. I'm overwhelmed, it's tremendous and will be a great experience," Diaper told BBC Radio Solent.

Diaper, who has been boss of the Hampshire outfit for 14 years, felt his players fully deserved their place in the final on 10 May.

We talk about it all the time, there are professionals that don't get to play at Wembley, so for Sholing to be there is unbelievable

"I can't get enough credit to the players, we deserved to go through," he said.

"I'm just pleased for the players. Any manager is only as good as his players and I'm lucky to have a good team."

Eastbourne fought back from 3-0 down to narrow the deficit to 3-2 at the Oval but Sholing held their nerve and sealed victory three minutes from time through Nick Watts.

And Sholing midfielder Byron Mason said the achievement, which will earn his club £17,000 from the Football Association's prize fund, was "a dream come true".

"It's up there as one of the best moments of my life playing with all my mates that I've known for years," the 27-year-old said.

Sholing now have 13 matches left to play in 33 days and will have played 70 matches over 44 weeks by the end of the season, but Mason said it will be an occasion to treasure nonetheless.

"We talk about it all the time, there are professionals that don't get to play at Wembley, so for Sholing to be there is unbelievable," he said.

"In a few years time I can look back and say I played at Wembley."