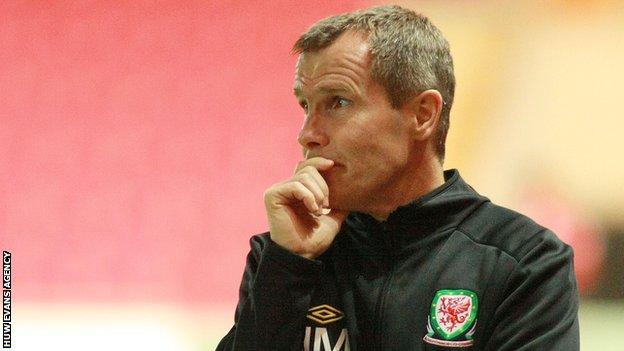 Wales Women manager Jarmo Matikainen says Wednesday's World Cup qualifier against Ukraine in Llanelli will be a test of their progress.

The hosts go into the clash at Parc y Scarlets boosted by a 5-1 away win over Turkey.

But the visitors have two games in hand over Wales and Matikainen said: "The game is extremely interesting - how far have we gone? How far have we come?"

With one team qualifying by right and the best four second-placed teams going into a play-off, Finn Matikainen believes his side have the chance to qualify for the tournament in Canada in 2015.

"There's still a chance for Ukraine or even ourselves to win the group, so that's what we're aiming for.

"But there's still lots of football to be played even for winning the group.

"From our own team development processes point of view it's a big challenge and a big step, which we need to take."

The Wales boss says Wales must be wary of Ukraine's greater experience, but hopes his side can repeat their first-half efforts at Ataturk Stadium, Eskisehir against Turkey.

Wales stormed to a 4-0 lead at the break while skipper Jess Fishlock scored a hat-trick in the dominant display.

Matikainen added: "I went there [Turkey] twice to see them play, against Montenegro and I went to see them against Ukraine, and I knew that it would be a very tough test.

"And in the first half we played there was probably the best we have played so far. That's extremely pleasing."

Wales have won three of their four qualifying games for Canada 2015, with their only defeat coming against leaders England.