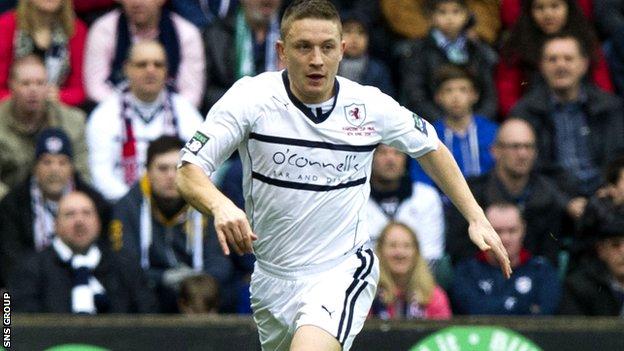 John Baird scored with nine minutes remaining as Raith Rovers saw off a comeback from Queen of the South.

Joseph Cardle shot the hosts ahead from close range after four minutes and Paul Watson fired in soon after.

Marc Durnan levelled with two headers late in the first half before Baird turned in Ross Callachan's pass.

Reece Donaldson was shown a second yellow card in the final stages but Rovers held on to move up to seventh spot in the Championship.

Queen of the South stay fourth and remain level on points with play-off rivals Dumbarton, with three games of the season remaining.

Chris Mitchell was the supplier for both of Durnan's goals but it was not enough to prevent the visitors falling to their third defeat in four games.

With Ramsdens Cup final hero Baird knocking in the winner, Rovers are now nine points clear of Cowdenbeath in the relegation play-off place.