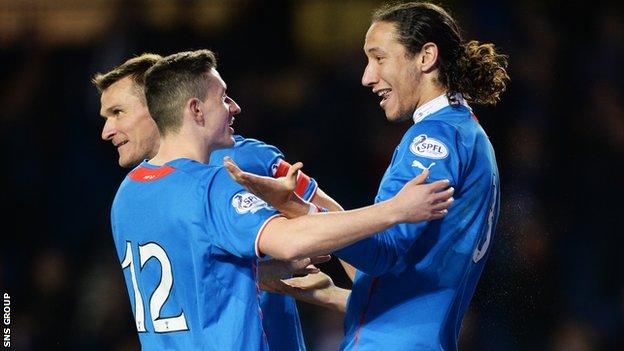 A laboured performance eventually delivered an emphatic result for Rangers against a workmanlike Forfar.

The score reflected the home side's domination of possession, but not the blunt nature of so much of their play.

A rare moment of quality saw Ian Black thunder in a second-half strike, which pierced the growing tension.

Further goals from Bilel Mohsni and Dean Shiels, both from headers, ensured that the closing stages, at least, were comfortable for Rangers.

A subdued mood had to first be overcome. Losing to Dundee United in the Scottish Cup semi-final three days before had robbed Rangers' season of the last of its truly meaningful assignments.

There is pride left to play for, as well as an unbeaten league record to defend, but the campaign will now amble to a close for the Ibrox side.

Forfar could still theoretically reach the play-offs, so at least had something tangible to play for. The crowd at Ibrox was underwhelmed, and the encounter on the field was unable to stir a sense of excitement.

The players went through the motions, but although there was plenty of effort, quality and composure did not take their place in either line-up.

Individuals could still stand out. Jon Daly endured the kind of game that saw team-mates come to console him during breaks in the play. During the first half, he headed wide from a corner kick then slashed an effort off target from near the penalty spot; after the interval, he could not make full contact with a Richard Foster cross, so failed to convert from close range.

Others were culpable, too, although Nicky Clark was full of running and Steven Smith hit a couple of long-range free-kicks that made the Forfar goalkeeper Darren Hill work.

These were rare moments of interest, and it was telling that the loudest cheers of the night were reserved for when Marvin Andrews, the Forfar substitute and former Rangers defender, warmed up on the touchline.

Forfar were limited opponents - it took until the 83rd minute for them to muster a shot on target - but Rangers had to first overcome their own mundane play.

The sense of frustration might have contributed to Rangers' eventual breakthrough, though, since Black took it upon himself to try to be decisive. Receiving the ball 30 yards from goal, he simply lashed it into the top corner with his left foot.

The introduction of Fraser Aird brought some dynamism to Rangers' play - one run down the right drew applause from around Ibrox - and the raised spirits brought reward.

When Shiels' cross bounced off the face of the crossbar, Mohsni was on hand to nod in from two yards. Aird then crossed for Shiels to convert with a header.