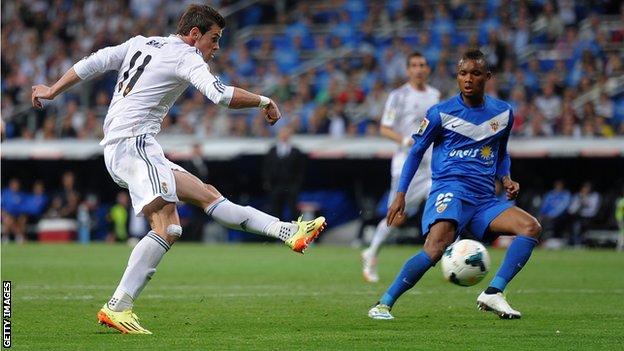 Gareth Bale's 19th goal of the season helped Real Madrid boost their Spanish title chances with an easy win against Almeria at the Bernabeu.

Real led through Angel Di Maria's angled drive before Wales forward Bale doubled their lead with a powerful left-foot effort after the break.

Isco tucked inside the near post three minutes later before substitute Alvaro Morata guided in a late fourth.

Real Madrid have won all six of their La Liga games this season without Cristiano Ronaldo.

Carlo Ancelotti's men are second behind their city rivals Atletico, who visit Getafe on Sunday, on the basis of the head-to-head record between the two teams.

But they moved above arch rivals Barca - with five matches remaining - after the Catalans suffered a surprise 1-0 defeat at Granada.

Despite the absence of the injured Cristiano Ronaldo, Real never looked like being threatened by an Almeria side which has spent the vast majority of the season stuck in the bottom three.

And, after being initially frustrated by visiting keeper Esteban in the first half, their attacking quality shone through after the break to earn a resounding win.

Now Ancelotti's side switch their attention to the Copa Del Rey final, where they face Barca in Valencia on Wednesday.