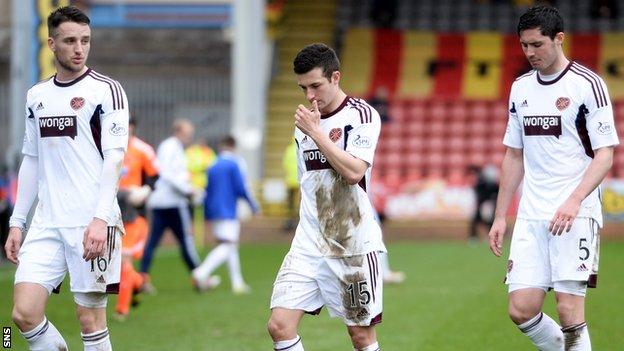 Hearts administrators BDO are trying to establish if money due to be handed out at the end of the season can be paid to the club now.

BDO have approached the Scottish Professional Football League as they seek to raise cash to help Hearts fulfil their fixtures.

Relegation was confirmed on Saturday but Hearts will still be due a share of Scottish Premiership monies.

There is only enough money to keep Hearts going until the end of April.

However, if extra funds can be found it is hoped full agreement over Anne Budge's proposed takeover can be finalised by the time the season ends.

Creditors of major shareholder UBIG have agreed to transfer their 50% holding to BIDCO, the Budge-backed vehicle for future fan control of Hearts in conjunction with the Foundation of Hearts group.

But no deal has yet been reached regarding the 29% shares held by Ukio Bankas, which holds a charge on Tynecastle Stadium.

Foundation of Hearts chairman Ian Murray MP says receiving money early from the SPFL would not necessarily cause problems with a shortfall later in the year.

"The club does need money to survive and if it had come out of administration yesterday (Monday) then the Foundation of Hearts was committed to putting in some working capital to see it across the line in any case," he told BBC Radio Scotland.

"When that working capital goes in, it will just be reflective of the fact that the club will either need more or less resources when it comes out of administration so it shouldn't really make too much of a difference in that sense."

With the Premiership now splitting in two, Hearts have five fixtures remaining against their fellow bottom-six sides. The Tynecastle outfit's next match is against Ross County on 19 April.