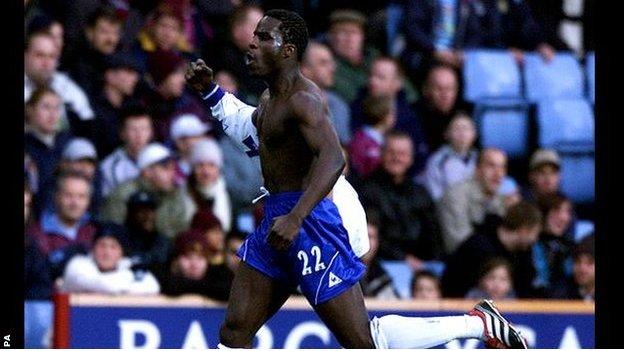 "If you are bitter about the situation, you just beat yourself up all the time. You have to rise above that."

Words that can apply to any number of people and situations.

On this occasion, they come from the mouth of Ade Akinbiyi, the much-travelled striker now trying to make his way as a football coach.

It could be harder for me than a white person, but I have to strive

When Chris Hughton was sacked by Norwich this month, the number of black managers in the top four divisions of English football fell to zero.

In a country where approximately 25% of professional players are black, it does not quite add up.

Little wonder that Paul Davis, the former Arsenal midfielder now working for the Professional Footballers' Association, has such a tough time persuading black candidates to take their coaching badges.

"We are not in a great situation," he says. "A lot of players are frightened to come out and say what they think because they feel people will start to make life difficult for them.

"I can understand that. There is a lot of talent out there. Not all of it is being developed correctly."

One man who has not been put off by the overwhelming odds is Akinbiyi.

His playing days are now over following a career that began at Norwich City and finished at Colwyn Bay, with stops along the way at Hereford, Brighton, Gillingham, Bristol City, Wolves, Leicester, Crystal Palace, Stoke, Burnley, Sheffield United, Houston and Notts County.

The 39-year-old is now taking the first steps on what he hopes will become an equally long coaching career.

"You have to be positive," he tells BBC Sport. "You cannot block yourself off and take the attitude there is no point getting your coaching badges because you won't get a job.

"It could be harder for me than a white person, but I have to strive. I don't think of it as working harder. I just feel I have to do what it takes to get to where I want to go.

"Others don't think like that. They might think it won't happen no matter what they do. That is up to them. My mentality is to work doubly hard.

"It could take five, six, 10 years. I will always strive to reach where I want to go. For me, that has nothing to do with colour."

Twelve months ago, PFA chief executive Gordon Taylor was speaking optimistically about the imminent implementation of the Rooney Rule, a system that tackled the absence of black coaches in the NFL by forcing franchises to interview at least one black candidate for any job vacancy.

In England, the concept did not get past the discussion stage amid fears it would contravene employment law.

Many regard the stalled idea as the only way of changing the status quo.

And Akinbiyi is not blind to the issue.

He has worked with campaign group Show Racism the Red Card to improve a situation he cares passionately about.

But he is adamant that, on an individual basis, the motivation for change comes from within.

"If I am going to coach at the top level, I have to break down that barrier myself," he says. "No-one else can do it for me.

"You have to be busy, you have to put your face everywhere. If you do that and it still doesn't happen, then you might think something is wrong."

Since being forced to quit through injury in 2010, Murray has been a regular television pundit, in addition to gaining the qualifications required to climb the coaching ladder and is currently working with players without a club on behalf of Nike.

"Matt's career ended quite early," says Akinbiyi. "When he was getting a bit fed up with his injury, he got his coaching badges. Now he does a lot of TV stuff. He is putting himself about.

"Putting yourself out there, trying to do something… it helps you along the way. That is what most of us black people have never really done. We can moan and say we haven't got this job or that one, but it is about the overall package."

But Rooney Rule architect Cyrus Mehri feels more than individual positivity is required. Having travelled to the United Kingdom last year in the belief he had a captive and receptive audience, the American anticipated progress being made by now.

He is dismayed that positive steps have not been taken.

"I am surprised and disappointed," said Mehri. "The PFA is a strong part of English football and they were 100% behind it, but there was very little traction or leadership at ownership level. It seems to me things are going backwards not forwards.

"My own view is that the situation will not change until you recognise there is a problem. I never said the Rooney Rule was perfect. It came about because no-one had a better idea. It is not positive discrimination. It is just about adding people to the mix."

The Football Association maintains it is working hard on the matter.

Out of a pool of nearly 30,000 licensed FA coaches, 9,250 either refused or simply did not provide information on their ethnicity. Of the rest, 14.2% listed themselves in a category other than 'white English'.

Yet those figures are still not being replicated at the highest level on the management ladder.

All four black managers in Premier League or Football League posts at the start of the season - Hughton, Paul Ince,Chris Powell and Chris Kiwomya - have since lost their jobs.

What about lower down the league ladder?

Well, there are no black managers in the Conference Premier either.

Indeed, a closely fought battle is taking place to be the highest-ranked black manager in English football.

If you have your badges but also a bad attitude, no-one will want to touch you

One place below Solihull are Colwyn Bay, where Frank Sinclair, the former Chelsea and Leicester City defender, is in charge.

Phil Babb and Johnson Hippolyte are out of contention but doubtless hoping to push Hayes & Yeading and Maidenhead United slightly further up Conference South.

Andy Preece could argue he is doing better than all of them given Airbus UK Broughton will secure runners-up spot in the Welsh Premier League this season to claim a place in the Europa League for the second year running.

Then there is Akinbiyi, working under Sinclair at Colwyn Bay, spending Tuesday and Thursday evenings trying to improve a team who tend to play in front of around 300 spectators.

Yet not only does Akinbiyi love it, he also feels it is an essential part of his education.

"You have to start somewhere," he says. "Both myself and Frank are doing that.

"No-one can come back to us and say we have done nothing, that we passed our badges and just expected to come into the game. We have started near the bottom and we are trying to work our way up.

"If you have your badges but also a bad attitude, no-one will want to touch you."