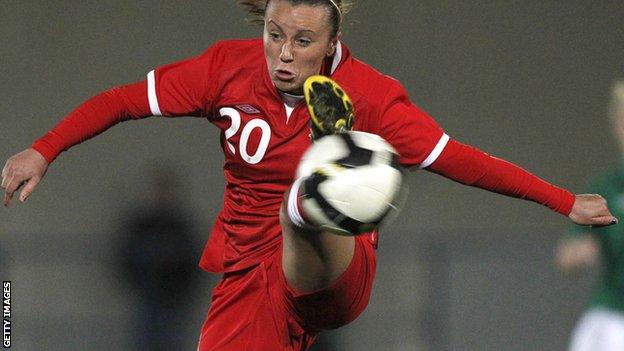 Wales came from behind to earn a point against World Cup qualifying Group 6 rivals Ukraine at Parc-y-Scarlets.

Wales fought back and Bristol Academy striker Natasha Harding fired home the equaliser from 10 yards out 13 minutes from time.

The result leaves Wales in second, three points above third placed Ukraine who have two games in hand.

Only one team qualifies from each group with the best four second-placed teams going into a play-off for a chance to reach the tournament in Canada in 2015.

England are runaway leaders at the top of Group 6 having beaten Wales in October.

Wales went into the clash against Ukraine boosted by a 5-1 away win over Turkey, but made a slow start to the match.

Goalkeeper Nicola Davies parried a left-wing cross into the path of Boychenko, who was unmarked at the back post and headed home from just three yards out.

Captain Jess Fishlock and striker Harding looked to link up in attack at every opportunity as Wales attempted to get back into the game.

The crowd in Llanelli thought Harding had won Wales a penalty midway through the first half, when she appeared to be brought down by Ukraine goalkeeper Iryna Zvarych.

But as Wales pushed forward Ukraine threatened on the break.

At the end of one counter attack, Davies produced a fine diving save to keep out midfielder Dariya Apanaschenko's powerful drive.

The equaliser finally came after Harding collected a right-wing cross and turned her marker to fire the ball across Zvarych and into the net.

Wales were by far the stronger team in the closing stages and Fishlock almost scored a late winner for the hosts.

Her 90th-minute shot, following a goal-mouth scramble, was blocked on the line and both sides were forced to settle for a point.

Wales' next World Cup qualifier is at home to Montenegro in Bangor on 8 May.