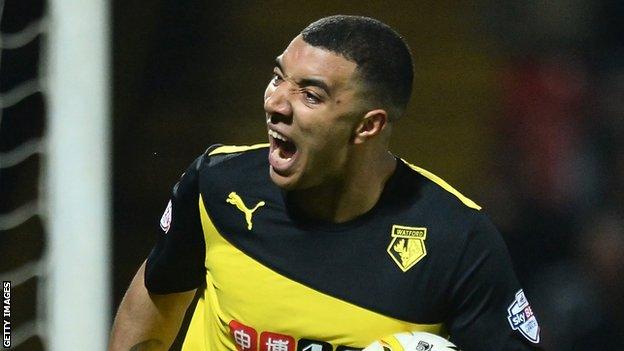 The Hornets fell behind in the play-off race by conceding late equalisers in their last two home matches.

"I don't think anyone wanted to come away feeling like we have been feeling. The defence were getting stick and now it's only right to praise them."

Watford are seven points adrift of Reading, who occupy the Championship's final play-off spot, but would be four points closer if it were not for late levellers by Blackburn and Burnley at Vicarage Road.

Beppe Sannino's side do have a game in hand on all of the five teams between themselves and the Royals though, which is a trip to Charlton on Tuesday, 29 April.

"We've got to try and keep on [ninth-placed] Bournemouth's tail at the moment. We've got a game in hand and we're five points behind them," said 25-year-old Deeney.

"You never know but it will be very difficult."

Deeney took his tally for the season to 22 by scoring the Hornet's third against Leeds and was denied a second by a smart Jack Butland save.

Although that still leaves him 15 behind Ross Jenkins's total of 37 for the 1978-79 campaign, the most by a Watford player in one season during the last 54 years.

"It will be a hard task with six games left. If Jack had let the second one in, I would have been better off."