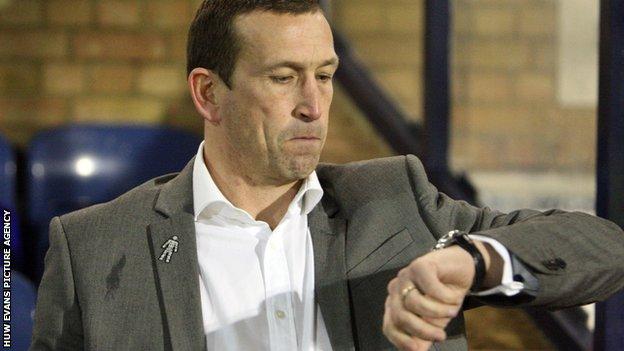 Newport boss Justin Edinburgh says his players are fighting for their careers at the club as he plans big changes in the summer.

The Exiles have only won twice in their last 21 matches in all competitions following Tuesday's 2-1 defeat against Plymouth Argyle.

They are seven points above the League Two relegation zone in 14th place with five games to go.

"We need to re-evaluate and have a busy summer," said Edinburgh.

"There are big decisions to be made in the summer, but that's what I'm paid to do.

"I've said that to the players - if they think the season is over and anyone's job is safe, then they're in a false situation.

"[Those decisions] are starting to be made."

Edinburgh has already confirmed club captain David Pipe and midfielder Michael Flynn are being released at the end of the season.

He says he will now look to add some new personnel to the squad and potential new recruits could include defenders.

Centre-back Ismail Yakubu has been ruled out for the rest of the season after damaging his ankle ligaments during the 1-1 draw at Chesterfield.

County have not won at Rodney Parade since their 3-2 victory over Oxford United in February, something Edinburgh is keen to change quickly.

"We need to give these fans a home win very soon because it's been too long," said Edinburgh.

"As well as we've played at home this season, I think we've just got to have a little more nous now to win games.

"One more win would more or less guarantee our safety, but as a manager my mind-set is to accumulate as many points as possible to finish as high as we can do."