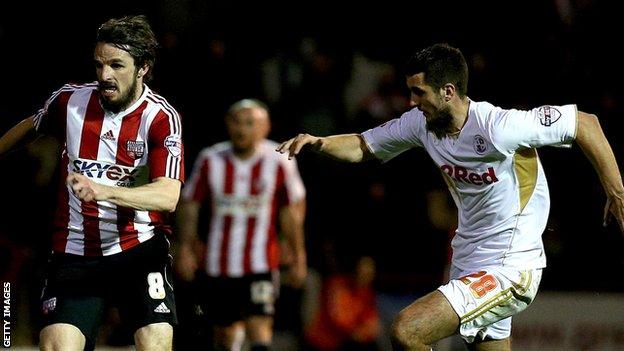 Crawley midfielder Gary Dicker says their six-match losing streak is "a bit embarrassing" for everyone at the club.

The Reds are now just three points above the League One relegation zone, albeit with two games in hand and a superior goal difference.

"It has been six on the bounce and it is not good enough for anyone here," the 27-year-old told BBC Sussex.

"The sob stories are finished now. It is up to us out on the pitch to get the results. We have got to step up."

Since beating Wolves 2-1 on 18 March, Crawley have not picked up a single point from six League One fixtures.

He added: "The gaffer [John Gregory] and staff all do their work and it is up to us to produce and start picking up points.

"We need to do it sooner rather than later."

Since they overcame Wolves at the Checkatrade.com Stadium last month, Crawley have suffered defeats at the hands of Oldham, Sheffield United, Preston, Port Vale and Crewe and were then beaten by Brentford on Tuesday night.

The 2-0 defeat at home by Sheffield United is the only time they have been beaten by a two-goal margin during their losing streak.

"I think you are concerned after one loss in football," former Brighton man Dicker added.

"You'd be foolish to think there's nothing wrong if you lose a game.

"When you don't win you need to scrutinise it more and see what you can do better individually and then collectively as a team.

"We need to have a look at ourselves and get the finger out a bit more.

"We all need to chip in and probably create a few more chances and put teams under pressure. We don't look like we are going to punish teams enough.

"I don't think anyone is going to point fingers at anyone else as you never know when it is going to be your turn. I just think we need to start producing."

Crawley have been playing two games a week since mid-February following a string of postponements and will continue to do so until the end of the season.

Dicker, who joined Crawley on a six-month deal in January, believes the Reds must make better use of possession if they are to move away from danger.

"We need to be better on the ball and need to try hurt teams more when we are on the ball," the Irishman said.

"It's about being brave, taking it under pressure and trying to play out a bit more instead of knocking it up to the two boys [up front] and expect them to win headers.

"There is a lot to work on. We are not feeling sorry for ourselves."