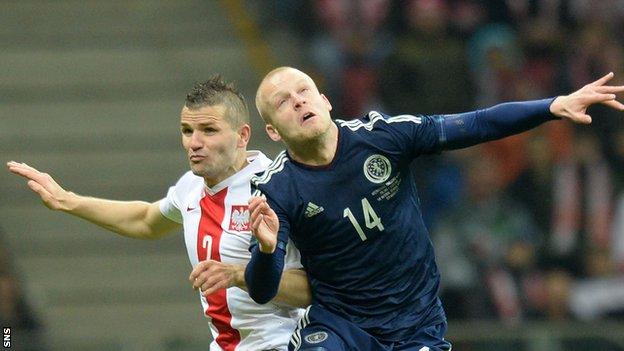 Forward Steven Naismith says he is as hopeful as he has ever been that Scotland can reach a major finals.

Scotland begin their Euro 2016 qualifiers later this year in a group that contains Germany, Republic of Ireland, Poland, Georgia and Gibraltar.

"It's the most optimistic I've been since I've been involved in the set-up," Naismith told BBC Radio Scotland's Sportsound programme.

"We've got a great squad, a lot of competition for places."

Gordon Strachan's Scots are currently on a five-match unbeaten run, which has included four victories.

We're definitely believing we can get second

Scotland have not reached a European Championship since 1996 and their appearance at the France 1998 World Cup was their last at a major event.

But Naismith, who won the first of his 28 caps in 2007, believes the long wait for qualification can be ended.

"Germany are going to be the hot favourites and you've got to take those games and get what you can from them," said the Everton forward.

"We're definitely believing we can get second. So will Poland and so will Ireland.

"The games with Poland and Ireland will be really big games but then Georgia will be able to have a say in the group as well."

Meanwhile, Naismith revealed how Everton boss Roberto Martinez has had a profound impact on his playing career.

The 27-year-old has scored nine goals in his second season with the Toffees, who are in the mix for Champions League places going into the final few weeks of the season.

"In this 10, 11 months alone, it's probably the most I've learned football-wise in my whole career and that's not talking about any of the previous managers, I learned a lot from them," added Naismith.

"When the manager came in, literally every single exercise we did involved the ball.

"It's just a totally different style of football to how I've known the British game to be growing up and it's opened my eyes a lot. It's really enjoyable."