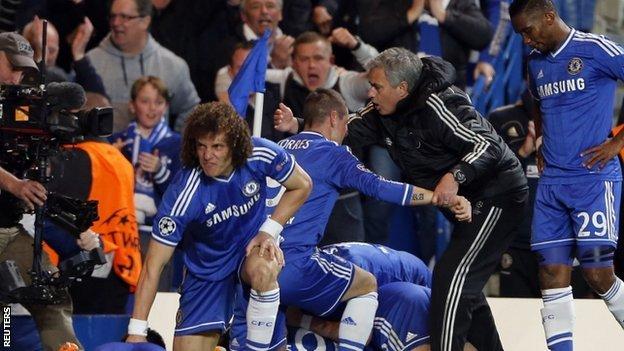 Chelsea have been drawn against Atletico Madrid in the Champions League semi-finals, while Real Madrid face holders Bayern Munich.

The Blues, chasing a third final in seven seasons, visit the Vicente Calderon in the first leg on 22 April, with the return eight days later.

Chelsea's 'inside man' at Atletico

Chelsea goalkeeper Thibaut Courtois is in his third season on loan at Atletico. Although the 21-year-old Belgian has yet to make a senior appearance for the Blues, he has established himself as Atletico's first-choice stopper and helped the club win the Europa League in 2012

Atletico have a one-point lead at the top of La Liga and defeated Spanish rivals Barcelona in the quarter-finals.

Nine-time winners Real are at home to holders Bayern in the first leg.

In the Europa League semi-finals, Juventus will face Benfica and Sevilla will meet fellow La Liga side Valencia.

This time, the Blues could face 21-year-old goalkeeper Thibaut Courtois, who is on loan at Atletico from Chelsea.

It had been reported that, under the terms of the deal that took Courtois to Spain, Atletico would have to pay a sizable fee for the Belgium international to play against the Blues.

But Uefa released a statement before Friday's draw saying Courtois would be eligible if the two clubs were drawn against one another, and any attempt by a club to exert influence on who the opposition select is forbidden.

"Chelsea may feel an element of relief that they have avoided the European superpowers of Real Madrid and Bayern Munich in the Champions League semi-final - but any underestimation of Atletico Madrid will be fatal.

"Jose Mourinho is renowned for his meticulous preparation and will have noted the relentless manner in which Diego Simeone's team deservedly overcame Barcelona in the quarter-final. The atmosphere in Atletico's Vicente Calderon will be thunderous and Chelsea will face a team as hungry and driven as their outstanding Argentine coach.

"The debate will continue over the availability of Thibaut Courtois, in his third season on loan at Atletico and, of course, Fernando Torres will return to his boyhood club, where he still retains iconic status."

The statement added any private contract between two clubs which might influence who is selected in a match would be considered null and void.

Chelsea boss Jose Mourinho won three of his four meetings with Diego Simeone's Atletico when in charge of Real Madrid between May 2010 and June 2013.

But Atletico have proved a force in Spain and in Europe this season.

Los Rojiblancos are on course for a first league title since 1996 and, in addition to Barcelona, have also knocked AC Milan and Porto out of the Champions League this season.

In the other semi-final tie, Carlo Ancelotti's Real must knock out last season's winners Bayern if they are to be crowned champions of Europe for a record 10th time.

"The semi-finals against Bayern will be very difficult, but it's not easy for anyone to play Real Madrid either."

Meanwhile, Chelsea's Premier League match with Sunderland, which was scheduled for Sunday 20 April, has been brought forward to 19 April to give the Blues more preparation time for the first leg of their European tie.

The game at Stamford Bridge will kick-off at 17:30 BST.