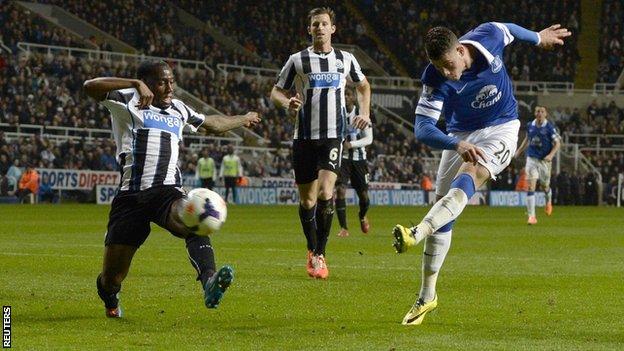 Roy Hodgson has praised Roberto Martinez and Mauricio Pochettino for their "bravery" in giving chances to young English players this season.

The England boss said he now had a bigger pool for his World Cup squad, giving him tougher choices to make.

He picked out Everton's Ross Barkley and Southampton's Luke Shaw.

"Roberto Martinez has been quite prepared to leave out Leon Osman for young Ross Barkley. That's a very strong decision.

"Mauricio Pochettino has picked players like Luke Shaw. That shows bravery and it's been rewarded."

Hodgson has to select his 23-man squad by 13 May. England start their World Cup against Italy on 16 June, having come through their qualification campaign unbeaten.

After the friendly win over Denmark last month he also praised Liverpool forwards Daniel Sturridge and Raheem Sterling, who have been key part of the Reds' title charge, as well as Arsenal midfielder Alex-Oxlade Chamberlain, who has impressed since returning from an early season injury.

Speaking at the Football Association Council meeting at Wembley Stadium, Hodgson added: "It's going to be tough for me because the pool of players that I have to choose from has got a lot bigger."