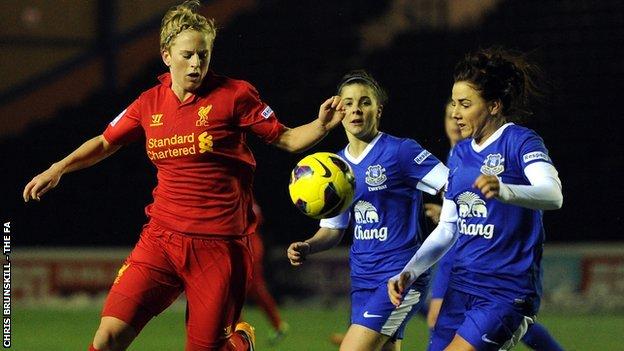 It used to be easy predicting who would win the league in English women's football. In nine of the past 10 years, the answer has been Arsenal.

The anomaly was last year when Liverpool won their first FA Women's Super League, and with the new season starting on Wednesday there are signs the league is set to be more competitive.

After Manchester City joined the top flight and several high-profile moves across the league, many experts are saying this will be the most open season yet.

It kicks-off with Arsenal hosting Notts County on Wednesday, one of 16 games which you can listen to on BBC Radio 5 live sports extra.

With the help of Doncaster Rovers Belles midfielder and BBC pundit Sue Smith, BBC Sport presents a guide to who is battling to win the league, beat the drop and gain promotion.

Digital Ambassador (selected by each club to be their 'digital face'):England goalkeeper Siobhan Chamberlain.

Much responsibility will rest on the young shoulders of England midfielder Jordan Nobbs, who is currently injured, as well as experienced striker Kelly Smith, who missed much of last season. If they can both stay fit while Ohno and Kinga adapt quickly, the Gunners could challenge but after being surpassed by Liverpool and Bristol last season, this year will not be any easier.

Sue Smith's verdict: "With so many game-changers being replaced by newcomers to the league, it could take time for Arsenal to gel. The Champions League loss showed they have work to do, and although I would say they will be in the top three, I'm not sure if they will challenge for the league title."

Manager: David Parker says he is looking to prove the doubters wrong.

Prospects: Boss David Parker admits that last season was a transitional one for his team as they slipped back from consecutive runners-up positions in the two previous seasons. But with that in mind, he hopes his side have an advantage over other teams who have blooded new players during the winter, and beating Arsenal in the Champions League will be a huge boost to his side. Losing defender Laura Bassett and striker Rachel Williams will be a big blow to their title chances but with a crop of talented youngsters coming through such as teenager Jess Carter, supported by the more experienced trio of Karen Carney, Jade Moore and Jo Potter, Birmingham will still cause problems for the better-resourced teams.

Sue Smith's verdict: "Birmingham were the best I've seen them for a number of years against Arsenal. They looked hungry over the two legs, maybe because people had written them off, and it's just a case of whether they can repeat that over the whole season. If they can, they will be in the top half of the table."

Manager: Dave Edmondson has previously managed in Australia for 11 years.

Prospects: The biggest question about last season's WSL runners-up is how they will cope without previous manager Mark Sampson, who is England's new head coach. Bristol were magnificent last year, but were beaten in the FA Cup final by Arsenal and missed out on the WSL title to Liverpool on the last day of the season. Whether they can achieve the same heights this season under new boss Dave Edmondson remains to be seen. They will still rely on Spanish strikers Laura Del Rio and Natalia to get the goals, but captain Corinne Yorston says fans can expect a slightly different style this season.

Sue Smith's verdict: "Mark Sampson will be a big loss - he instilled an attacking philosophy in the team and a sense of belief. Goalkeeper Siobhan Chamberlain's move to Arsenal will also be a big blow because she had a fantastic season. I think they will still be strong contenders, but I'm not sure if they will match their runners-up spot last year."

Prospects: The close season's big spenders will be looking to improve significantly on last season where they finished second from bottom and won three league games all season. Eight new players have come in the door, including Birmingham pair Laura Bassett and Rachel Williams, Arsenal duo Katie Chapman and Gill Flaherty and four other internationals, including South Korea international Ji So-Yun, whom team-mate Eniola Aluko calls a "magician". The problems were in defence last season but with England international Bassett an influential centre-back and Claire Rafferty returning from injury, there should be an rise in standards and Liverpool boss Matt Beard considers Chelsea as title challengers.

Sue Smith's verdict: "I believe that Chelsea can be title contenders because of the top-class players they have signed. Emma Hayes is a very forward-thinking manager and likes flair players and if they can knit together quickly with the help of full-time training, I think they can cause a few surprises."

Prospects: This season looks a challenging one for a team who were once Arsenal's closest rivals. Losing England internationals Fara Williams and Natasha Dowie to Liverpool the previous season was bad enough, but they have since seen England players Jill Scott and Toni Duggan move to new club Manchester City. They will be boosted by the return of injured defender Fern Whelan, and forward Nikita Parris will be aiming to fill Duggan's shoes.

Sue Smith's verdict: "Unlike the other teams, Everton do not seem to have brought in any big players from abroad or in the UK, but they have a solid youth system and a core of the team that others might need to build. As a Scouser, I would love to be proved wrong, but on paper, it looks like they might struggle."

Prospects: Liverpool went from two successive bottom places to champions last year after receiving the full backing of the club's American owners. Most people were surprised Matt Beard managed to make the squad gel so well in the course of one season, but with significant signings elsewhere, he thinks Chelsea start as favourites. Mind games or not, Liverpool will have to cope without injured German winger Nicole Rolser and former Lincoln midfielder Lucy Staniforth, but they have signed Arsenal midfielder Gemma Davison and will want to prove last season was no one-off.

Sue Smith's verdict: "I don't think you can look beyond Liverpool for the WSL 1 title. Training full-time meant the 10 players they signed last year gelled together very well. As long as Natasha Dowie keeps scoring goals, they remain the team to beat and the depth of their squad means they should be able to cope with injuries."

Manager: Nick Cushing is new to coaching women's football and has coached in the club's academy teams.

Prospects: Manchester City are the great unknown. Controversially introduced into the top tier instead of the more renowned women's team Doncaster Rovers Belles, City have wasted little time in flexing their financial muscles by signing an English international spine of goalkeeper Karen Bardsley, Steph Houghton, midfielder Jill Scott and striker Toni Duggan. The quartet have been joined by New Zealand international Betsy Hassett and all five train full-time. How the rest of the squad fares will be interesting, but talk of a title shot has been played down by captain Houghton and they will soon find out where they stand in the opening fixture against reigning champions Liverpool.

Sue Smith's verdict: "I've spoken to Steph Houghton and Jill Scott and they are playing down their chances, but they have been impressed by the non-international players in the team. It will be a learning curve, though, because experience counts for a lot. Perhaps a mid-table finish will be a good first season with an eye on building for next season."

Prospects: A name change and a 35-mile move from Lincoln to Nottingham may have angered fans, but the switch to use the men's team's resources has already paid dividends if the club's recruitment policy is anything to go by. Canada international defender Desiree Scott, England striker Ellen White and England goalkeeper Carly Telford have all joined after the club lost Karen Bardsley and Casey Stoney. Under boss Rick Passmoor last season, Lincoln had one of the best defensive records in the league and they will hope that White's goals can boost their league fortunes.

Sue Smith's verdict: "I worked under Rick Passmoor at Leeds and he is a brilliant manager. Last season, he worked with the players he had with a view to recruiting heavily over the winter, which he has done. There is a Leeds core to his team and I think we will see a significant improvement on last season."

Sunderland will start as favourites to win promotion after winning the second-tier FA Premier League over the past three seasons.

They will be pushed closely by Doncaster Rovers Belles, who were controversially demoted to WSL 2 at the end of last season with Manchester City taking their place in the top division. Watford, who were second behind Sunderland in the 2012-13 season, may also hope for a good season.

Sue Smith's verdict: "We [Doncaster Rovers Belles] finished bottom last season, so we want to show what we are about and the fact we stuck together is a bonus. Our aim is to get promoted but we will be up against teams that are relatively unknown so it will be a tough challenge. Sunderland will be a massive threat and start as favourites."

Fourteen Women's Super League games will be broadcast live on BT Sport, and 16 on BBC Radio 5 live sports extra. Goals round-ups will also be shown on the BBC Sport website.