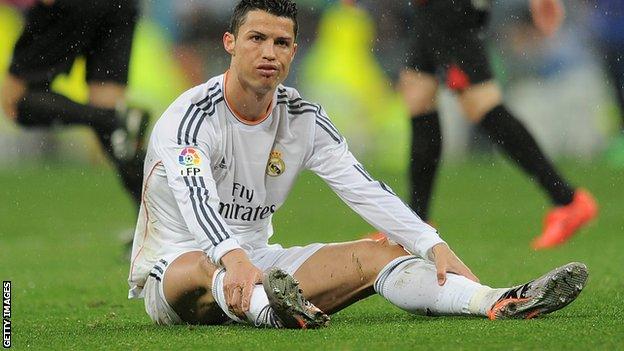 Real Madrid forward Cristiano Ronaldo is a doubt for Wednesday's Copa del Rey final against Barcelona because of a muscle injury.

Ronaldo, 29, was an unused substitute in Tuesday's Champions League quarter-final match with Borussia Dortmund because of a knee complaint.

However, Real have also confirmed that he has "an injury to the left biceps' femoris muscle".

The Spanish giants did not say how long he could be out for.

However Spanish media reports claim he could be sidelined for 15 days. That would see him miss Saturday's league game with Almeria, the cup final against Barcelona and the first leg of their Champions League semi-final.

Portugal captain Ronaldo has scored 52 goals in 45 appearances for club and country this season.

He has not played since Real's Champions League quarter-final first leg against Dortmund, where he scored in a 3-0 win.

Ronaldo was not included in the squad for last Saturday's 4-0 win at Real Sociedad in La Liga, where they trail leaders Atletico Madrid by three points, and did not play as Real lost 2-0 at Dortmund in midweek.

Despite that defeat, Real progressed to the Champions League semi-finals with a 3-2 aggregate win.