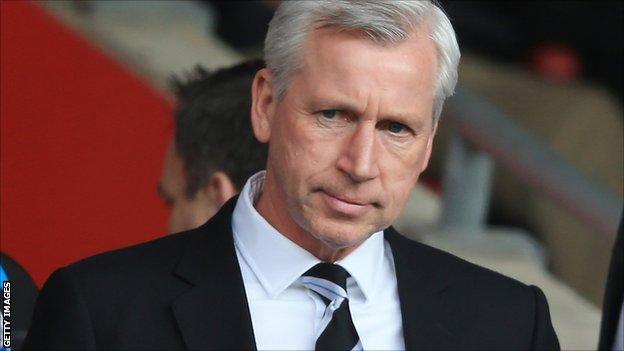 Newcastle boss Alan Pardew has said he is in "as tough a period" as he has experienced in his managerial career.

The 52-year-old was banned for seven games for a headbutt on Hull's David Meyler, and in his absence the Magpies have lost their last three matches.

"I'm not enjoying it because whatever you do in work or life you don't want criticism," Pardew told BBC Newcastle.

"It's been as tough a period as manager I've ever had."

Since taking his first managerial post at Reading, Pardew has led his Hammers side out in an FA Cup final and achieved victory at Wembley with Southampton in the Johnstone's Paint Trophy final.

By contrast, he also experienced the low of relegation from the top flight while Charlton boss - a club for whom he made more than 100 appearances for as a player.

Meanwhile, despite the club's relatively healthy Premier League position, currently six points clear in ninth place with five games to go, the pressure has grown on Pardew after a disappointing second half of the campaign.

United were six points behind Arsenal in sixth after a 5-1 demolition of Saturday's opponents Stoke on Boxing Day, but despite never slipping below ninth they have lost nine out of 14 top flight games since the turn of the year.

The sale of playmaker Yohan Cabaye to Paris Saint Germain is cited as one factor in the slump, as has been the absence of top scorer Loic Remy for the last five games with a calf problem.

"We need to replace Yohan, it's evident and the fans are frustrated that we're not producing the quality that we were," Pardew added.

"If you look at us over the last two or three years we have produced real quality.

"If you look back to [the win against Manchester] United in December and we were terrific, we've got to get back to that.

"The problems that have surfaced are not lost on me and we have to address that in the summer and I know Lee Charnley has been announced as managing director.

"I think it's good news as he's someone I work well with and [scout] Graham Carr works well with when it comes to transfers."