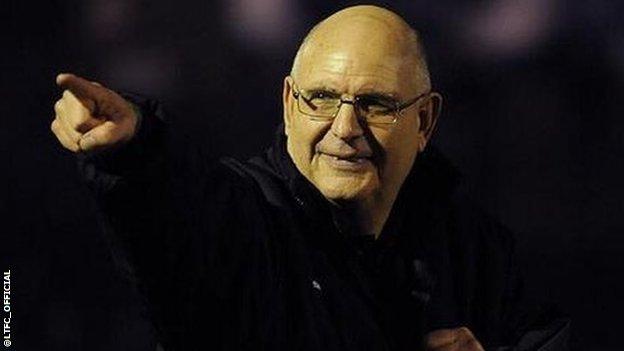 John Still's former vocation as a salesman has proven handy around Kenilworth Road.

Selling disillusioned Luton Town fans on his vision was probably the hardest thing he has ever had to flog.

And now, five years after sinking into non-league football, the Hatters will once again be a Football League club after sealing the Conference Premier title, courtesy of Cambridge United's defeat at Kidderminster on Tuesday.

Fourteen months ago, supporters started to buy what Still was peddling. But it took time.

"I was well received in the first games, except for one young man in a hat who called me something from the stand," said 63-year-old Still.

"That taught me something about their anxiety and their apprehension and their disappointment. It wasn't aimed at me. It was aimed at the situation.

"I made a note of it. I wrote it down," Still points to a notebook on his table. He actually writes these things down.

Bury Park, the enclave of Luton that swells with more than 7,000 Hatters every other Saturday, hosted Championship football as recently as 2007.

Three consecutive relegations and a total of 40 points in deductions for various financial problems have stained the walls of Kenilworth Road with bitterness.

They were docked 10 points for going into administration in 2007-08 and a further 30 in the following campaign, for a combination of continued insolvency and making illegal payments to agents.

Supporters have aimed their distaste at all and sundry; the Football Association, former owners and any manager who has failed to take them out of the Conference Premier. Mick Harford, Richard Money, Gary Brabin and Paul Buckle all fall into that category.

"John is such a unifying force at the club," said chairman Nick Owen, the BBC Midlands Today presenter, a lifelong fan, and the face of the Luton 2020 consortium that saved the club from bankruptcy six years ago.

"Supporters and a few of us at the club have become quite cynical over the years and embittered about how we were treated.

"John Still came along and he was just so calm. Such a comforting figure. He's got the fans all on side and that's been a tremendously important part of it."

It could have been so different for Still though.

The east Londoner's professional career lasted just one game when he damaged his knee on his debut for Leyton Orient, aged 17.

He made inroads as a part-timer in non-league, while selling industrial cleaning supplies the rest of the time, before a knee operation put paid to playing entirely.

He became Leytonstone boss aged 28 and then Maidstone manager, but quit shortly after taking them into the Football League.

"We won promotion, but I stayed with my proper job. I loved my job," said Still.

"I had a lovely life. I really enjoyed my work.

"So I ended up at Dagenham part-time, and out of the blue Peterborough came in for me. I thought it was just one of those opportunities and I probably needed to do it. I didn't want to look back at it and regret not doing it.

"I've done full-time management ever since."

After an unmemorable 14 months at Posh, Still ended up back at the Daggers in 2004 and became synonymous with the Victoria Road club, leading them to a stint in League One for the first time in their history.

It ended nine years later. Disgruntled when Dwight Gayle, now at Crystal Palace, was sold to Peterborough six months earlier than initially planned, the offer of taking over at Luton, in a division below, proved to be enticing.

It seemed a curious choice, leaving south Essex to attempt what four previous managers had failed to do - take Luton back to the Football League.

"I had other opportunities to leave. But once the Gayle thing happened, it disappointed me. I don't blame them, they needed the money," he said.

"Dagenham is the closest club I'll ever have to me. But also I'm a professional and I felt I might not get the best out of myself.

"The challenge of Luton was too good to turn down. People I spoke to tried to put me off. That's why I came.

"They would talk about the pressure of the job, the expectation. Gary Brabin had tried, Richard Money had tried, Paul Buckle had tried, Mick Harford had tried.

Still the best? Luton manager's records in the Conference

"I wanted to go somewhere and have a challenge. It wasn't the success of doing it. It's the ride. The highs and lows."

While previous managers have failed to harness the tenacity across the terraces at Kenilworth Road, Still has somehow utilised it.

Captain Ronnie Henry's run-in with a supporter during a game at Lincoln in September proved to be the catalyst.

Still invited the fan to training and brought him into a post-match team huddle. The message was clear: We are with you, not against you.

It was a move that went some way to sparking a club-record 27-game unbeaten run in the league and personified the quirkiness of the man in charge.

"He's been like that from the start. In team meetings he's always like that, relaxed and laid back," said top scorer Andre Gray, who has already eclipsed last season's personal total of 20 goals by hitting 27 this time around.

Investors and board members have done so much to stabilise the Hatters off the pitch, and with an average attendance that would stand up well in League One, managing director Gary Sweet's expectation of Championship football does not seem far-fetched.

Print it on a T-shirt

John Still is partial to the odd catchphrase, so much so that they have featured on club merchandise.

Here are three of his most popular:

It is an attainable prospect for Still, so often a pragmatist.

"Working in business taught me success has to be achievable and realistic. If none of those are there, you haven't got a chance," he said.

"If I was told Luton want to be in the Champions League in five years, I wouldn't be here. It's not achievable or realistic.

"If you want success quickly, I'm not your man. Any success I've had has not been bought and has not happened in a flash."

Second-tier football is something Still has never experienced, despite offers while he was at Dagenham.

The man defined by non-league achievements, for nurturing lower league talent, could feasibly add that achievement to his CV.

"It gives me so much more pleasure to make a player than buy a player," said Still.

"And it would give me so much more pleasure to take a team to the Championship than to go to a Championship club."

Owen added: "It would be fabulous if he could be a manager higher up. But I only want it to be with Luton Town."

In the meantime, fresh from being the saviour to end Luton's nightmare, Still can take a look at his notepad and know that the man in the hat with the big mouth is probably a happy Hatter these days.