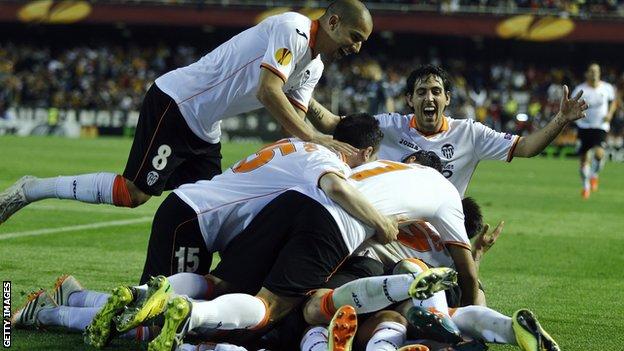 Valencia made Europa League history as they overturned a three-goal first-leg deficit to beat nine-man Basel 5-3 on aggregate and reach the semi-finals.

After losing the first leg 3-0, Paco Alcacer scored a hat-trick while Eduardo Vargas and Juan Bernat got one each as Valencia won the second leg 5-0 after extra time.

On a thrilling night of Europa League action, 15 goals were scored across the four quarter-final ties, but the most drama was undoubtedly in Valencia.

Basel had produced one of the surprise results of the first leg by comfortably beating former Uefa Cup winners Valencia in Switzerland, meaning something special needed to happen if the Spanish side were to progress.

It took a while for Valencia to get going, but they gave themselves hope with two goals in quick succession before the break. First, Alcacer fired beyond goalkeeper Yann Sommer before Vargas powered in a header.

Valencia continued to push in the second half and their dominance was rewarded when Alcacer swept in from the edge of the area to level the tie.

The game went to extra time, where things took a turn for the worse for Basel when they had Marcelo Diaz red carded before Gaston Sauro was shown a second yellow soon after.

From then on it was all Valencia and further goals from Alcacer and Bernat sealed their passage.

It marked the first time any team has recovered from a 3-0 first-leg deficit since the Europa League started in 2009/10.

Juventus had little trouble reaching the last four as they beat French side Lyon 2-1 on the night for a 3-1 aggregate victory.

It took a late goal by Leonardo Bonucci to earn Juventus a 1-0 win in France last week but the Italians needed just four minutes to take the lead in Thursday's return fixture, Pirlo firing in a trademark free-kick that Lyon goalkeeper Anthony Lopes could only watch as it passed him on its way into the net.

Carlos Tevez failed to score for Juventus against Lyon, meaning he has not scored a goal in Europe since netting for Manchester United against Porto in 2008

Jimmy Briand headed beyond Gianluigi Buffon for an equaliser but Claudio Marchisio's shot from long-range took a huge deflection off Samuel Umtiti to cement Juventus's place in the last four.

Sevilla, meanwhile, produced a much more convincing performance to seal their progression to the last four as they beat Porto 4-2 on aggregate.

They had lost the first leg 1-0 in Portugal but it took the Spanish side just five minutes to score and level the tie. Porto defender Danilo fouled Carlos Bacca inside the area and Ivan Rakitic stroked home the resulting penalty.

From then on the home side dominated and deservedly added a second as Vitolo raced on to a headed pass before side-footing an effort beyond Porto goalkeeper Fabiano.

That put Sevilla ahead in the game and on aggregate and it was to get even better when Bacca swept in a third midway through the half.

The La Liga side had Coke sent off in the second half when he picked up a second yellow for a foul on Ricardo Quaresma, but Kevin Gameiro eased Sevilla fans' fears of a fightback as he fired in from a loose ball. Quaresma pulled one back in injury time, but it was not enough to deny the hosts.

Finally, Benfica, who lost to Chelsea in last year's final, had little trouble seeing off AZ as their 2-0 win sealed a 3-0 aggregate victory.

Rodrigo turned in Eduardo Salvio's cross at the back post to put the home side ahead.

The two again combined midway through the second half, with Rodrigo scoring at the far post from Salvio's superb ball.

The draw for the semi-finals takes place on Friday.