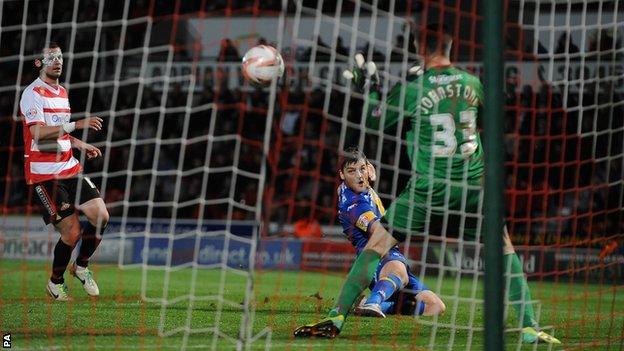 Derby County kept alive their faint hopes of automatic promotion to the Premier League with victory over relegation-threatened Doncaster.

The Rams knew anything but a win would mean promotion for Burnley, who won at Blackpool earlier on Friday.

George Thorne curled his first of the season late in the opening half, before Theo Robinson went close to levelling.

Derby's victory guarantees a play-off spot, and keeps them eight points behind Burnley - who occupy the Championship's second automatic promotion place - with three games to play.

But the Clarets will definitely secure a return to the Premier League if they beat Wigan at Turf Moor on Monday, whatever the Rams do at home to Barnsley.

Ahead of kick-off, Derby manager Steve McClaren said he had "expected Burnley to win" at Blackpool and that a play-off place was his side's aim.

Since arriving in September, the former England manager has guided County to 20 wins in 34 league matches, form which has seen them shoot from 14th position to third and sparked hope of a place in the top flight for the first time since 2008.

If they fall short of an automatic return, McClaren's side are set to enter the play-offs with plenty of momentum after a fifth win in seven outings.

Doncaster manager Paul Dickov called for his side to show his "drive, enthusiasm and belief" and they defended diligently in a tight first half, while using wingers David Cotterill and James Coppinger on the counter attack.

They almost went ahead when Derby defender Richard Keogh's back pass rolled towards his own goal and would have gone in but for a quick recovery by Lee Grant to stop the ball on the line.

McClaren moved from the directors' box to the touchline just in time to see the 21-year-old, on loan from West Brom, convert his first goal in a Derby shirt.

The Rams have led at half-time on 19 occasions this season - more than any side in the league - and went close to doubling their advantage after the break when Craig Bryson raced on to Thorne's pass, only for Sam Johnstone to parry wide.

Burnley will be promoted to the Premier League if they beat Wigan Athletic on Monday.

If Derby fail to beat Barnsley, the Clarets will also return to the top flight for the first time since 2010, regardless of their own result

Gabriel Tamas, playing in a protective mask, headed over as Doncaster fought back. But only Charlton and Blackpool have managed fewer goals in the league than Dickov's side this season, and they could not find an equaliser to aid their survival bid.

But the contest was effectively ended when Martin stabbed home.

The striker stretched to convert a 19th league goal of the season, before Ward, whose cross created the opening, was denied a goal when his audacious chip was kept out by a finger-tip Johnstone save.