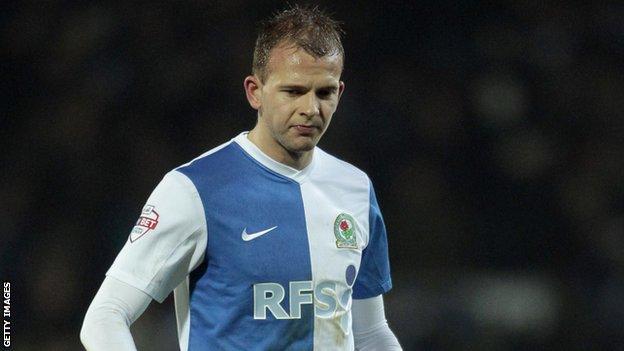 Blackburn Rovers missed a good chance to pile the pressure on their fellow play-off hopefuls with a dismal draw at home to relegation-threatened Yeovil.

Jason Lowe struck a low shot against the post for the hosts before Jordan Rhodes headed wide from close range.

Yeovil rarely threatened, but Liam Davis did shoot wide from 20 yards after the break.

The Glovers remain bottom of the table with three games left, while Blackburn are four points adrift of the top six.

Rovers, now unbeaten in nine matches, knew going into the match how important a victory would be.

Down with a whimper?

Yeovil have won only one of their last 10 games, drawing five and losing four

And with fellow play-off hopefuls Reading,Brighton and Bournemouth failing to win, the hosts would have gone just two points outside the play-off zone had they done so.

But despite enjoying most of the possession, a lack of creativity saw them struggle to break down their dogged visitors, who had won just once in their previous nine matches.

Lowe had the first chance of the game for the hosts, seeing a low strike cannon off the post.

Top scorer Rhodes then headed wide from close range as Blackburn had the better chances of a lacklustre opening 20 minutes.

Joe Ralls had the visitors' first opportunity, shooting wide from an angle, but they offered little else in a half devoid of any real quality.

With other results going their way, the hosts were expected to come out brightly after the break but, again, there was little tempo as Yeovil held them at bay.

And the home fans grew increasingly frustrated as the visitors finished the stronger, with Davis and Joel Grant both shooting wide.

Rhodes had a chance to win it late on, but headed straight at Marek Stech.

Blackburn manager Gary Bowyer: "Frustrating is the word I would use.

"Yeovil are fighting for their lives and, you never know, this might be a good point.

"You can only concentrate on the next game. Three more games of sheer excitement and twists for the fans.

"It is going to be entertaining. Our aim is to play Wigan on the last day with something to play for."

Yeovil manager Gary Johnson: "Both teams needed the win and both teams tried to win it.

"I was really pleased with my team. I thought we played good football and are still hanging on in there.

"Against a team trying to get into the play-offs for the Premier League... for little old Yeovil, we gave as good as we got and made it competitive. We gave ourselves a chance to snatch it.

"You don't know if it is a good point yet. Coming into the game we probably thought we would need three wins."