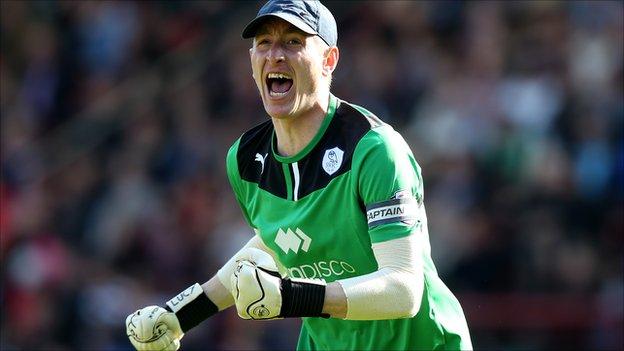 Wednesday took the lead when Atdhe Nuhiu drilled home from the edge of the area, before Marc Pugh headed in Lewis Grabban's cross for 1-1.

Hutchinson was sent off late on before Best and Maguire earned victory.

The result leaves the Cherries three points off the top six with three games left as Brighton moved into the play-off places after Reading's defeat at Wigan.

Bournemouth found Wednesday keeper Chris Kirkland in imperious form and he was called into action early on to stop Grabban's shot from an acute angle finding the corner of the net.

Nuhiu took advantage of sloppy defending from the home side to give Wednesday the lead.

Steve Cook mishit an attempted pass straight to the feet of the Nuhiu and the giant Austrian striker controlled the ball neatly before rifling past a helpless Camp.

Bournemouth drew level 14 minutes before half-time when the lively Grabban sprinted past three defenders before crossing for Pugh to head beyond Kirkland at close range.

The Cherries' joy lasted just three minutes until Chelsea loanee Hutchinson headed Wednesday back in front with his first goal for the club after a long throw from Michail Antonio caused confusion in the box.

Grabban and then Andrew Surman were denied an equaliser by Kirkland towards the end of an entertaining first half.

However, there was nothing the former Liverpool goalkeeper could do to prevent Kermorgant heading Bournemouth back on level terms for a second time.

Wednesday, who are 15th in the Championship table, were forced to see out the final 27 minutes a man light after goalscorer Hutchinson was shown a second yellow card for a late lunge on Kermorgant.

Kermorgant was denied a second goal by another brilliant intervention from Kirkland as the Frenchman's 20-yard free-kick was tipped onto the crossbar.

Best struck the decisive blow in the 87th minute, tucking home the rebound after Antonio hit the crossbar at the end of a fine solo run.

Maguire made it 4-2 in stoppage time, tapping in Best's centre from six yards as Bournemouth were caught pushing for an equaliser.

Bournemouth manager Eddie Howe: "I felt we had to win all four of our remaining games so it will be difficult now but we have to try to win the last three.

"We were not at our fluent best but still created enough chances to win and Kirkland made important saves at key times.

"We were going all out for the win and sometimes that is dangerous against 10 men but we had no alternative.

"I felt we would regret it if we settled for a draw and ended up missing out by a point."

Sheffield Wednesday boss Stuart Gray: "I am so proud of the players. It may seem like an upset but I thought we deserved it.

"We knew this would be a difficult place to come because Bournemouth have won the majority of their home games and we showed unbelievable character after going to 10 men.

"We went into the last game of last season looking over our shoulders so it will be nice to go into the last three without having any pressure.

"You want your substitutes to make an impact and Leon did that."