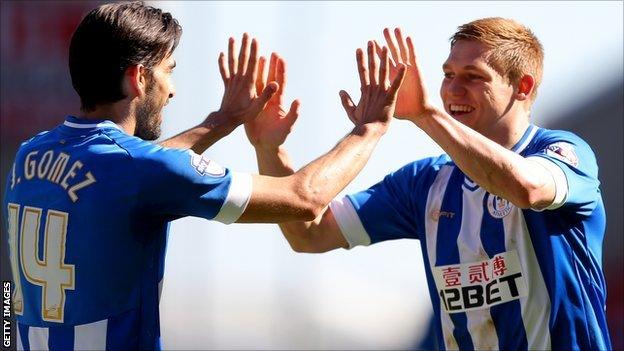 Reading slipped out of the play-offs as they were comprehensively beaten by Wigan, who strengthened their own place in the top six of the Championship.

A fine strike from Jordi Gomez gave Wigan a deserved opener before Martyn Waghorn converted a rebound to double their lead before the break.

Callum McManaman then smashed home off the underside of the bar for 3-0.

The result means Brighton move above Reading by a point with three games remaining.

Having lost on penalties to Arsenal in the FA Cup semi-final last weekend, the emphatic victory strengthens Wigan's hopes of a return to Wembley in the play-off final, as they have moved five points ahead of sixth-placed Brighton.

Wigan's win was their 14th in 24 league games under Uwe Rosler, and they have only been beaten at home once in 15 matches.

Reading had the first shot of the game through Jordan Obita in the opening minute but barely tested Wigan goalkeeper Ali Al-Habsi thereafter.

McManaman had a shot parried and both he and Roger Espinoza fired into the side-netting before Gomez opened the scoring in fine style with a rasping strike from 30 yards.

James McArthur and then Gomez were denied by Royals keeper Alex McCarthy but Waghorn was in the right place to double the lead after good work from McManaman.

McCarthy made another fine save to keep out James Perch's header from Gomez's corner but McManaman made it three shortly after the interval with a confident finish from 15 yards.

Reading might have been reduced to 10 men when when Hope Akpan lunged in on Espinoza, but referee Craig Pawson elected to show only a yellow card.

McArthur should have scored but dragged his shot wide when well placed, while Michael Hector had a rare sight of goal at the other end.

Wigan travel to second-placed Burnley on Easter Monday before completing their campaign with three more matches they will believe are winnable - at home to Blackpool and away at Birmingham and Blackburn.

Wigan manager Uwe Rosler: "Before I start I would like to congratulate my former club. I'm very happy for the players, the staff, the supporters - everybody connected to Brentford [on their promotion to the Championship]. It's a fantastic achievement.

"The first 40 minutes here was to perfection.

"We played so much as a unit, we circulated the ball very quickly and we were helped by a very good playing surface - compliments to the ground staff for allowing us to play the way we wanted.

"The goals came at the right time, sometimes you have to shoot from outside the box against teams that defend very deep, and we should do that even more often."

Reading boss Nigel Adkins: "Wigan are the best team we've played this season. They gave us more problems than anyone we've played.

"From my point of view, the level of our performance was nowhere near the level that we needed to be or expect. The three goals we conceded, we didn't stay with our runners, and we haven't dealt with situations as we should have.

"Wigan got the flow of the game in the first half, and they deservedly got control of the game. We came out in the second half determined to do better, but the third goal is a shocking goal to give away, which made it even more challenging.

"We're still in there, we're in the mix, we're in the race. There's three games to go, and it's all to play for. We need three wins, that's what we have to go and do. We'll reflect on this day and make sure that the 11 men who run out for the next game are willing to run through a brick wall."