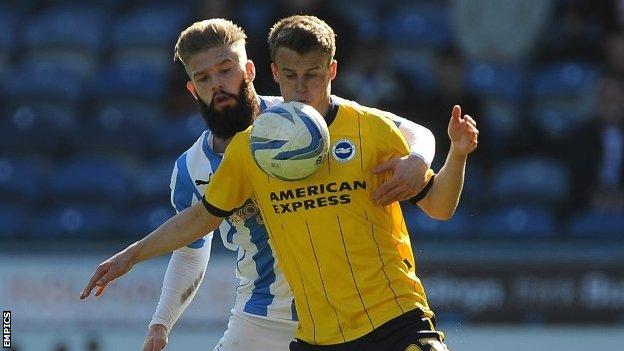 Brighton moved into the Championship play-off places after coming from behind to draw with Huddersfield.

The Terriers led after six minutes when Oliver Norwood beat Tomasz Kuszczak with a free-kick from 25 yards.

Kuszczak kept his side in the game after the break by pulling off a good save from another Norwood free-kick.

And Bruno Saltor scored an equaliser for the Seagulls with seven minutes left after a defensive error from Huddersfield.

The result was enough to take Brighton above Reading and into the top six with three games remaining, although Ipswich could go above them if they beat Watford on Saturday.

Terriers out of form

Huddersfield have not won any of their last 10 games, losing six. Their last win was 5-0 against Barnsley at home on 1 March

Huddersfield, who have not won in 10 matches, are seven points above the relegation zone with four games remaining.

Brighton's top scorer Leo Ulloa had the chance to level and duly put the ball in the net, but his header was ruled out for a foul.

After the break Lewis Dunk fouled Adam Clayton and was lucky not to be shown a second yellow card, with Kuszczak denying Norwood from the resulting fee-kick.

The keeper was also needed to save from Adam Hammill and then used his legs to keep out Sean Scannell's attempt.

Craig Mackail-Smith twice went close with headers for the visitors, who had captain Gordon Greer booked with 13 minutes to go when there was an altercation as he tried to retrieve the ball from the Huddersfield bench.

There were late chances at both ends - Wells and Scannell forced saves from Brighton keeper Kuszczak and Dunk had a header saved by home keeper Alex Smithies in injury-time.

Huddersfield manager Mark Robins: "On balance, I have to be happy with a point but we could have had all three. I was pleased with the application and the steely way we set about our jobs.

"If we had taken another of the chances we would have been all right. We have been creating chances all season but just not been clinical enough.

"We said we needed four points from the Easter weekend fixtures, so we have to go to Yeovil on Monday and win. They are fighting for their lives but we have the players who are capable of going there and getting three points.

"We fought hard and if we hadn't switched off at the end we would have won the game. A draw was probably a fair result."

Brighton assistant boss Nathan Jones: "We are delighted to be still in the mix with three games left.

"We had a lot of injuries early on and the aim was to hang onto the coat-tails of the other clubs until we could get the injured players back.

"We always knew we had a competitive squad with everyone fit. We had an injury list that would have crippled even Manchester United, Chelsea and Manchester City.

"This is a fantastic club. It's a Premier League club in terms of set-up and ambition. The difficult bit is getting there on the pitch."