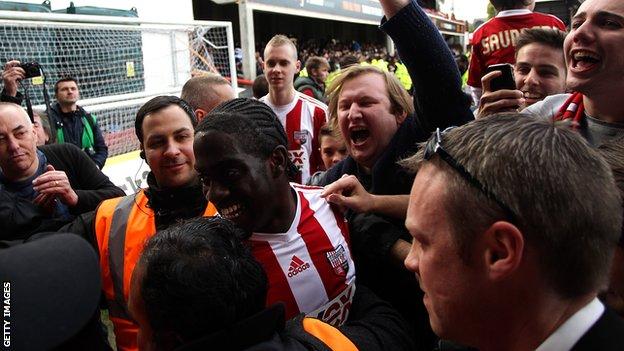 Brentford won promotion to the Championship after beating Preston thanks to Alan Judge's penalty.

Defeats for Leyton Orient and Rotherham mean the Bees are back in the second tier for the first time since 1992-93.

Judge had a second spot-kick in the second half after Bailey Wright was penalised for holding Clayton Donaldson but the Irishman slipped and sent his effort over the crossbar.

The final whistle saw a pitch invasion at Griffin Park but Brentford had to wait for confirmation of Rotherham's result at Wolves, with the Millers losing 6-4 despite a late fightback.

Brentford started the brighter of the two sides, with Judge's shot from distance forcing Rudd to parry over.

The home side took the lead on the half hour with Wright giving away a penalty after a scramble in the box, and on-loan winger Judge drilled low and hard to the keeper's left.

Preston came close to an equaliser after the break as Chris Humphrey dragged his shot wide of the goal and Alan Browne narrowly sent a header past the post.

The Bees had a chance to double their lead with 10 minutes remaining but Judge was unable to convert from the spot a second time.

The west London side, who narrowly missed out on automatic promotion from League One last season and were then beaten in the play-off final by Yeovil, moved 10 points clear of third-placed Leyton Orient with three games of the campaign remaining.

With Brentford set to move into a new 20,000-seater stadium at Lionel Road for the start of the 2016-17 campaign, chief executive Mark Devlin says the club will look to establish themselves in the second tier, where they have spent only eight seasons since the end of the World War Two.

"The club has been slowly but surely on the rise over the last couple of years. I think this club will be a threat to others now.

"This is going to put us on the map. We have a great group of players and the staff behind the scenes and you can see what it means to supporters after so many near misses.

"We have got a bit of status to us and the club is on the rise now."

"I'm delighted with the performance and the way the boys applied themselves.

"It was a big day and they are not fools. They know all the various permutations of what had to happen.

"They have been magnificent all season.

"It's great the boys can enjoy themselves now. I'm delighted for the owner Matthew Benham as the footballing department has started to repay some of the faith and support he has shown to us.

"It is a big step and we have got a long-term plan in place."

"We said before the game that we wanted to make sure we didn't want to turn this into a party and have them celebrating promotion here.

"There weren't enough players that turned up today to stop that from happening.

"When you don't turn up and produce a performance with or without the ball, you're not going to win against anybody, especially against a strong team that are looking for automatic promotion."