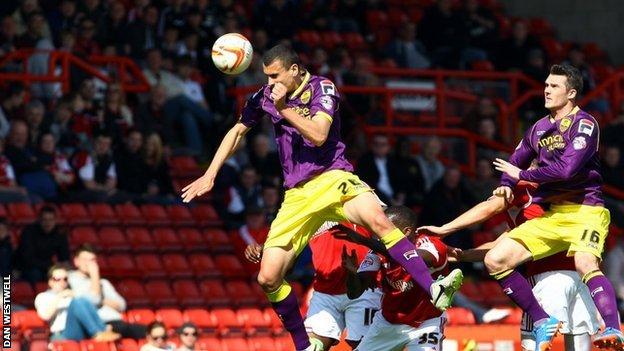 Sam Baldock took advantage of some terrible defending to grab a late winner for Bristol City and ensure Notts County slipped into the League One relegation zone.

City led when Baldock netted his 24th goal of the season from close range.

The visitors dominated the second half and missed several chances but Baldock's composed finish won it.

Baldock made the most of a poor Hollis header and then got the better of away goalkeeper Bartosz Bialkowski to score into an empty net.

Notts are now three points from safety while Bristol City are nine points clear of the drop zone.

"Deep down, I thought we were safe after last week [after Walsall win].

"I don't know if it was a game we deserved to win but we're not going to make any apologies for it.

"There's been many a game since I've been here that we've really deserved to win and we haven't.

"It's a good three points and hopefully that nudges us further up the table."